THE story of the Stratfords of Belan House in Moone drew a fantastic crowd to the Tanyard in Ballitore on Monday 3 February.

The talk, organised by the South Kildare Villages History & Heritage Group, was given by Adrian King who related the life and times of the family (who came from Warwickshire and became Earls of Aldborough) with the aid of photographs, fantastic drone footage of the locality, and his own research.

The Stratfords came to Ireland in the 17th century and purchased Belan, building a mansion from the ruins of a Fitzgerald castle that was destroyed in 1641. The mansion, which was built by the architects Castle and Bindon, was one of the largest gabled houses in the country at that time – it featured extensive parklands with a classical temple and obelisks in the grounds.

“The first Stratfords were over here in the 1660s,” Mr King explained. “They weren’t as such planted – they came here as adventurers with money to buy land and they built up 28,000 acres within two generations. 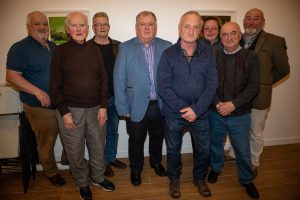 “They were Members of Parliament for the Borough of Baltinglass and most of the land was in Wicklow.”

John, the third son of Edward Stratford, was created Baron of Baltinglass and was made Earl of Aldborough in 1777 – he decided to enlarge Belan House to match his new status. His son Edward, the second earl, built Aldborough House in Dublin. A subsequent earl, described as a notorious gambler, mortgaged Belan House and let the property fall into disrepair. The title became extinct on the death of the sixth earl in the 1870s.

Mr King explained that the house is completely gone; what remains of its former splendour are the ruins of the old stables, the remnants of a teahouse, the temple and the obelisks. During his talk, he noted that Belan House was in decline from 1823 with auctions held in 1845 and the 1850s. The estate was later broken up and sold off.

“They were substantial landowners,” he added of the Stratfords. “They tried to progress with creating employment and creating industry. They built the town of Stratford-on-Slaney [in Wicklow] and they built it as an industrial town to attract weavers and flax milling and wool milling to create employment. At the height, in 1792, they had about 500 people working there.”