AFTER their game against Wicklow fell foul to Storm Ciara last weekend, the Kildare ladies hope to take to the pitch in Hawkfield at 2pm on Sunday in their third game of the season. 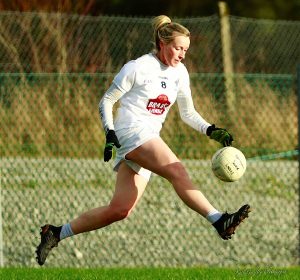 Manager Daniel Moynihan has named the same starting 15 as he did last week before the game was postponed so Erica Burke is once again in line to start her first game for Kildare since 2018.

The game will shown live on the LGFA Facebook page and will feature co-commentary from former Kildare star Aisling Holton.

The Kildare camogie side also saw their game postponed last week and they will also be in action in Hawkfield at 2pm on Sunday. Against Westmeath, it will the first game under new manager GT Troy and the extra week of preparation will have done them no harm at all.

The camogie stars of the future are also in action this weekend. Declan Curran’s minor team play Limerick in the All-Ireland Championship on Saturday in Hawkfield at 2pm and then on Sunday in Kiltale at2.30pm the Kildare U16s play Meath.

Sullivan scores seven as Kildare romp to victory in Limerick

Leahy prepared to work her ass for success