KILDARE’S U20s begin their Leinster Championship against in St Conleths Park on Saturday afternoon and manager Gay Campbell has named a strong looking line up. 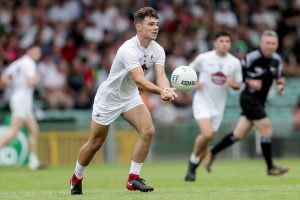 The U20 Championship has moved to an earlier date in the campaign calendar and the best underage players in the province are in for a hectic period.

Offaly defeated Louth last weekend to reach this quarter-final and the winners of this game will be out again next weekend before the final on 5 March.

This is Campbell’s second year in charge of the team at this age grade and he will be hoping for a better time than last year when, as reigning All-Ireland champions, Kildare were knocked out at the first stage by Laois.

The signs are that this year’s team are better placed to progress after an impressive showing in the John Kerins Cup. Kildare showed admirable fighting spirit to come from behind to earn results against Dublin and Meath and eventually topped a group that also contained Laois. Kildare then put up a good showing before losing to Cork in the final of that competition.

The good performances in that competition presented Campbell with the kind of problem that every manager wants and picking his matchday squad must have been a headache, never mind settling on a starting 15.

There was plenty of talk in the early part of the of the year about the availability of school players and in the end Campbell has decided to leave Naas CBS duo Alex Beirne and Paddy McDermott on the substitute’s bench but Scoil Mhuire Clane’s Cian Burke, Ardscoil Na Trionoide’s Sean Moore and Salesian College’s Aaron Browne do start.

Goalkeeper Burke is one of three players in the starting line up who won a Leinster Minor title last year, along with Adam Conneely and Browne. Conneely had an excellent John Kerins Cup, although often as a wing back but reverts to the more advanced role that he occupied for the minors last year. Browne was the star of that minor team but suffered a bad hand injury that ruled him out of Celbridge’s run to the Kildare U21 final and he only featured from the bench during the John Kerins Cup but there will be great interest to see how the talented forward steps up in age grade.

One forward who has certainly laid out his credentials in pre-season is Shane O’Sullivan. The Clane man has been in imperious form so far this year, from play and from frees, and will be Kildare’s go to man in attack. Manager Campbell has spoken about not relying one forward for score though and the team will also look to Adam Steed, who played in this year’s Sigerson Cup final for IT Carlow, and Naas duo Darragh Kirwan and Luke Griffin for scores.

Team captain DJ Earley, who was part of the 2018 All-Ireland winning team, has struggled with injury in the early part of the season but will start at wing back.

But despite the strength of this Kildare side, this will be far from a walk in the park. Offaly enjoyed pre-season success themselves and beat Clare in the final of the Liam O’Connor Cup. They carried that form into the Leinster Championship and two goals from Sean Courtney helped them to a 2-6 to 0-9 win over Louth in the preliminary round last week. Aaron Kellaghan, son of former Athy manager and Offaly star Paschal, scored three points in that game too and they will arrive in Newbridge with their confidence and that should make for an exciting game.