NAAS CBS schoolboys Paddy McDermott and Alex Beirne came off the bench to kickstart a Kildare comeback that ended with Kildare just about getting their noses in front at the end thanks to an injury time McDermott point. 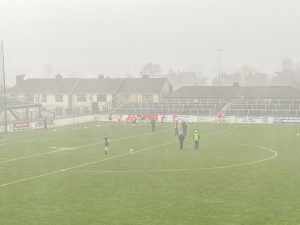 Torrential rain just before the 2pm throw in meant it was dubious as to whether this game should have gone ahead at all but it was the visitors who dealt with the conditions better in the first half and they led 0-6 to 0-2 at half time.

Within seconds of McDermott’s introduction in the 38th minute he set up a goal for Shane O’Sullivan. Offaly could have replied immediately but Jack Bryant was fouled when through on goal by Jack Hamill, resulting in a black card for the Kildare corner back.

Offaly weren’t able to put their extra man to its full advantage and after Beirne equalised in the 54th minute there looked only one winner.

O’Sullivan twice struck the upright from dead balls as Kildare tried to get ahead and they finally landed the all important winning point in the second minute of injury time after McDermott raced down the right.