THE 28th annual Féile Bríde in Kildare town, held between Friday 31 January and Saturday 8 February, was once more a fantastic success and attracted visitors from around Kildare, Ireland and indeed further afield.

The festival featured a packed programme of events starting with a Brigid’s Eve ritual at St Brigid’s well – more than 200 people young and old attended according to Sr Phil O’Shea from Solas Bhride and a member of the organising committee.

St Brigid’s Day, fittingly, featured a morning workshop in Solas Bhride where over 110 participants wove a St Brigid’s cross, followed by an event in the afternoon which revisited some of the traditions and customs associated with St Brigid and their relevance today. A lovely morning was also enjoyed by all who took part in a Eucharistic celebration at St Brigid’s well on Sunday 2 February – the centre later played host to harpist Sarah Freeley who offered a taste of Ireland’s unique harping heritage. 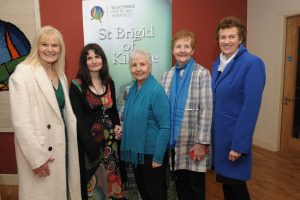 During the festival local historian Liam Kenny spoke about St Brigid in Europe, while an evening celebrating local poets, writers, musicians and dancers was held at the town’s library. Kildare Heritage Centre was also involved in the celebration, with maps available for children to explore St Brigid’s treasure trail as well as a discount on the Legends of Kildare virtual reality experience throughout the week.

A highlight for many was the sold out Féile Bride concert on Friday 7 February at the Solas Bhride Centre, featuring musicians Steve Cooney and Cormac Breatnach. “It was an absolutely magical night of music,” Sr O’Shea said, describing both as extraordinary musicians. “People are still talking about it, a magical, beautiful night of music. It was just wonderful.”

Nature and the world around us was one of the topics explored by different events during the week; Juanita Browne from the National Biodiversity Data Centre, for example, gave a talk about practical steps to make gardens pollinator-friendly. The annual Celtic lecture – presented by Niamh Brennan in the Kildare Education Centre (which sponsored the event) – was titled ‘This Sacred Universe: At the Heart of Religion and Science’.

That continued in Féile Bride’s final event, the Afri Justice & Peace Conference, with a theme of ‘Rekindling; Revitalising; Re-wiling; Restoring’. Included on the agenda were talks about rewilding and conservation, while tree planting took place at lunchtime.

“It brought a buzz to the town for the week,” Sr O’Shea said of the festival, adding that they deeply appreciate the work of all the volunteers and everyone who helped make Féile Bride such a success. “It’s a festival with a difference… it’s certainly a lovely way to celebrate the beginning of spring.”

Over 100 confirmed cases of Covid 19 in Co Kildare