IT’S a big weekend for Kildare’s senior footballers and hurlers – but for every different reasons.

Three defeats in a row have left Jack O’Connor’s footballers embroiled in a relegation battle and their derby against Laois in the Allianz Football League Division 2 on Saturday evening (throw in 7pm) has a lot more significance than simple local bragging rights. 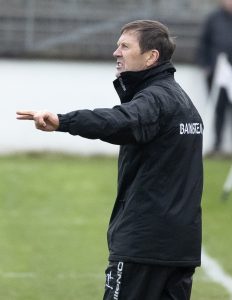 Kildare, along with Clare and Fermanagh, find themselves cut adrift from the rest of Division 2 and it looks very much like two of that trio will make the drop to Division 3 for next season but even more importantly than that, will play in the Tier 2 Championship this summer if they don’t reach a provincial final.

The stakes couldn’t be higher for the misfiring Lilies and the games are running out for them to find some sort of winning momentum.

A cursory glance at the league table lays bear the reason that the three bottom sides find themselves in such bother. Their scoring totals – Kildare (51), Fermanagh (49), Clare (43) – are least nine points behind the top five. Kildare simply aren’t scoring or creating enough to consistently win games.

So it was boost to see Adam Tyrell bring some new life to the forward line on his first start of the season last time out against Roscommon and along with Daniel Flynn and Niall Kelly, the inside trio contributed a very decent tally of ten points. The problem though was twofold, apart from a brace by Paddy Brophy the only other score through the rest of the team was a free kick from goalkeeper Mark Donnellan and also that Kildare’s attacking threat went with Tyrell when he was replaced in the 57th minute. The impact from the three forwards that came off the bench that day was minimal and Kildare simply have to get more from their attack.

The top five in the division have scored at least two goals than the bottom three and apart from a scuffed Daniel Flynn effort that was cleared off the line in Armagh, Kildare have barely looked like getting a shot away in their last three games never mind actually raising a green flag.

That’s not to lay all the blame at the door of the forwards, Kildare have hardly been rock solid at the back either. The two Roscommon goals in the last 17 minutes of the last game were the first that Kildare conceded this season but clean sheets against Fermanagh and Armagh owed more to good fortune and good goalkeeping than any great defending.

It’s ten years and one month since Laois’ last senior win over Kildare, and their previous win before that was in the 2005 Leinster semi-final, but they will sense their opportunity to put their rivals in real bother, and their confidence will be bolstered by two U20 Championship wins over Kildare in the last nine months.

Like Kildare, they also appointed a Kerryman for this season and under Mike Quirke they have already recorded some impressive results – most notably beating Armagh in Portlaoise.

Kildare’s last league visit to Portlaoise was in 2015 when Emmet Bolton’s late goal earned Kildare what could have been a crucial win but it proved just a temporary stay of execution and Jason Ryan’s team were demoted to Division 3 after a defeat to Galway the following week. A win on Saturday evening would go a long way to avoiding a similar fate.

It’s a different sort of escape from their division that is on the minds of David Herity’s hurlers when they make the long trip to Ballycran for their Allianz Hurling League Division 2B game against Down on Sunday (throw in 2pm). 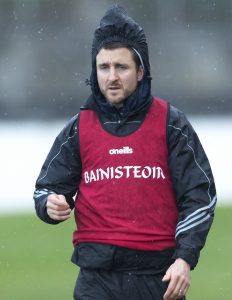 David Herity’s hurlers could secure their place in the league final in Down on Sunday
Photo: Sean Brilly

The maths for Kildare are simple, if they win and Derry beat Roscommon then those two teams will compete in the league final and battle it out for promotion.

Kildare have been flawless in the league so far and have racked up huge scores in beating London, Warwickshire and Roscommon but Sunday’s game will be a very different proposition.

Down lost by a goal to Derry in their first round but have won their three games since and they will also be all out on Sunday looking for the win that would put them in the league final.

The two teams met as recently as last December when Down ran out 0-22 to 0-12 winners in St Conleths Park in the Kehoe Cup but that game is likely to bear little resemblance to Sunday’s game, certainly Kildare will hope so.

Manager Herity was furious after that game but has been delighted by the effort and quality shown by his group since the turn of the year. They’ve done everything asked of them so far but after three relatively easy wins you could say that Kildare’s season only really starts on Sunday.

It’s also a big weekend of football action for a couple of Kildare’s schools teams.

After the county going over 100 years without a Leinster ‘A’ title the school that ended that drought. Naas CBS, are looking to reach their third final in a row when they play the Marist, Athlone in Kinnegad on Saturday at 1pm.

Ronan Joyce’s team have looked imperious so far in the competition and have made their way to the last four with relative ease. They will be up against a battle hardened Marist side who had to dig very deep to beat Scoil Mhuire Clane by a point in the last 16 round and then won by two in a Westmeath derby against Colaiste Mhuire Mullingar in the quarter-final. They are likely to include Ruairi Fallon, who was recently voted as man of the match for Roscommon in the Connacht U20 semi-final win over Sligo. Ben O’Carroll and Stephen O’Connor have also scored well in the forward line.

But none of that will worry this confident Naas side and their focus will be solely on producing their best possible performance. In Paddy McDermott and Alex Beirne they have players themselves who have excelled at intercounty U20 level this year but it is a very well balanced team who don’t just rely on those two players.

Colaiste Eoin of Dublin and St Josephs, Rochfordbridge of Westmeath meet in the second semi-final on Monday at 4.30pm.

Also on Saturday St Farnans, Prosperous play in their second All-Ireland semi-final in three years when they take on Ballybay of Monaghan in the last four of the Ignatius Rice Cup in Darver at midday.

Goals from Jamie O’Brien and Rory Moran helped the Prosperous school to a 2-16 to 2-5 win over Colaiste na hInse last Monday in the Leinster Senior Football ‘D’ final and they will now hope to go one step further than when they lost to Galway side St Cuans at the same stage in 2018. They will look to forwards like Eoin Bagnall, a star on Kildare’s Leinster minor winning team last year, and Kevin Campbell for the scores to win the game.

Bagnall and Daniel Lynam played in that 2018 semi-final and like many of their team mates lost another All-Ireland semi-final earlier this year, albeit in a different code, when beaten 1-0 by Pobailscoil Ghaoth Dobhair in the FAI John Murphy ‘B’ National Cup semi-final.

Bagnall and co. will hope to make it third time lucky in national semi-finals on Saturday.

**The Kildare Nationalist will have reporters at all these games and you can can read reports, reaction and analysis in next Tuesday’s paper.