NEWBRIDGE College pulled out all the stops at Energia Park (Donnybrook) on Tuesday afternoon to dethrone a much-fancied St Michael’s College at the semi-final stage of the Leinster Schools Senior Cup. 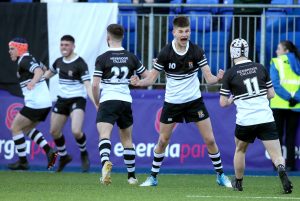 Just six days earlier at the same venue, Dave Brew’s junior side had upset the odds against the Ailesbury Road men to book a last-four date of their own with Terenure College. The prospect of a repeat result looked in doubt when Newbridge faced into a 14-0 deficit with as many minutes gone on the clock.

However, having fallen behind in similar fashion to CBC Monkstown and Kilkenny College in their previous encounters, they gradually reined in the challenge of their big-time counterparts. Cormac King, Donal Conroy and David O’Sullivan all crossed over for Newbridge, while Sam Prendergast’s 10 point haul off the kicking tee played a big part in securing a first final appearance since 1996 for the Common side.

This victory sets up an historic all-Kildare decider at the RDS on March 17, following Clongowes Wood College’s success against Castleknock College a day earlier.

Though Newbridge were initially on top of possession, they leaked a try to their Metropolitan counterparts with just four minutes gone on the clock.

Following a turnover deep inside their own half, Michael’s winger Henry McErlean raced clear for a superb breakaway score. Full-back Chris Cosgrave was on hand to supply the extras and with Newbridge flanker Mark Dennis subsequently sent to the sin-bin, they inevitably doubled their cushion in the 14th-minute.

Instead of opting for a routine strike at the posts, Cosgrave kicked to touch on the left-hand side. The ensuing line-out maul placed the three-time champions on the front foot and hooker Lee Barron was on hand to dot down in clinical style.

Another Cosgrave bonus effort create further daylight between the teams, before the return of Dennis heralded an improved second-quarter showing from Newbridge. When they edged towards the Michael’s ’22’ in the 26th-minute, it produced a massive roar in the main stand.

While they were turned over on this occasion, Newbridge finally opened their account courtesy of a Prendergast place-kick just past the 30-minute mark. They continued to work through the phases approaching the interval and although they couldn’t add to their tally, it provided them with considerable encouragement on the resumption.

Having found themselves 11 points adrift at the midway point, Newbridge knuckled down to significantly reduce this deficit. Capitalising on excellent work by Prendergast and Lucas Berti Newman – who dovetailed effectively with skipper Marcus Kiely in midfield – scrum-half King sprinted over the whitewash for a much-needed converted score. 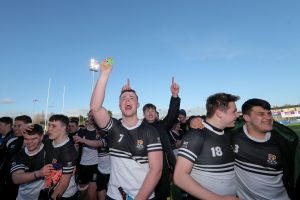 Prendergast held his nerve to slot the resulting conversion between the uprights as Newbridge suddenly had Emmett MacMahon’s brigade in their sights. Michael’s appeared to settle again through a Cosgrave three-pointer, only for Pendergast to do likewise at the opposite end.

Like their junior compatriots a week beforehand, Newbridge’s challenge gathered pace the longer the second period progressed. They sensed that Michael’s were there for the taking and after Conroy spotted a gap on the right-flank, he broke free for an outstanding 52nd-minute try in the corner.

Prendergast couldn’t find the range off his third kick at goal, but Newbridge had nevertheless hit the front for the very first time. They did suffer a blow when referee Nigel Correll issued a yellow card to hard-working lock Patrick O’Flaherty.

In his absence, Michael’s regained the lead with an impressive Eddie Kelly five-pointer. Even though Cosgrave’s bonus strike on the right-wing was powerfully struck, the woodwork came to the rescue of Newbridge.

This left them within touching distance of the win they craved and the decisive scores of the contest arrived just past the hour. A sweeping move across the Michael’s line worked its way towards O’Sullivan and he displayed remarkable composure to get over for Newbridge’s third try of the day.

Whereas luck deserted Cosgrave at the Bective end, Prendergast’s later conversion attempt went over with the aid of the posts. This extended their cushion to three points and while Michael’s piled on the pressure in the closing minutes, Newbridge were not to be denied.

The win sets up a all Kildare final after Clongowes Wood won through on the other side of the draw and that game will take place on St Patricks Day in the RDS. 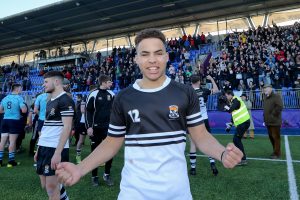