“JEAM would leave it up to me. One thing she would always say, ‘Do everything right by the mare’,” says Monasterevin horse trainer, Mark Fahey. 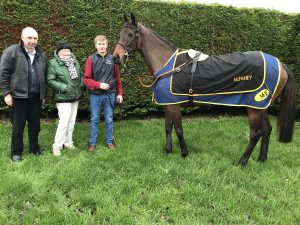 The mare in question, National Hunt horse, Well Set Up, is owned by Rathvilly horse breeder, Jean Corrigan. The horse is the apple of her eye. Not just Jean’s eye but that of her husband, Ger Kilcoyne; and as far as Fahey himself is concerned the mare is right up there as the best horse he has ever trained. After all, the seven year old has given the owner, the trainer and jockey, Ricky Doyle, their first ever listed and Grade 3 races when they put back-to-back wins together towards the end of 2019.

It is a classic case of something good happening for a small owner, a small trainer and a relatively unknown jockey. Some years ago, Jean bought the mare’s mother, Such a Set Up, in Goffs for “a couple of thousand” as the owner recalls.

“She had an old fashioned pedigree. She wasn’t a fine foal but I liked her pedigree. I bred her. I didn’t race her,” recalled Jean.

Out of Such a Set Up came On the Blind Side who has won races at venues including Cheltenham, Sandown and Kempton. Nicky Henderson trains the horse.

Meanwhile, back in Ireland a couple of years ago, Jean toyed with the idea of sending Well Set Up racing. When she showed up well at a schooling session after a meeting in Fairyhouse the decision became easy. Mark Fahey wasn’t there that day but he was told how well the horse had run.

“The jockey told me she was flying home. I rang Jean and she told me she was going to the track with this one. With the pedigree she has, when I heard that the owner was anxious to go to the track, I knew then this one is not too bad. We went with her then,” recalled Mark.

Their faith in the mare was vindicated when she won her bumper at Down Royal. St Mullins man, Richie Deegan, rode her to victory that day.

After that the pressure came down on the connections. They now had another decision to make. With her sibling (On the Blind Side) having done so well in England the advice from those in the know was that Well Set Up should go to Tattersals horse sales in February. It was hard not to go to listen. After all, On the Blind Side had fetched €205,000.

Unfortunately, Well Set Up picked up a slight leg injury days before they were due to travel.

“It was like a twisted ankle for all the world,” explained Mark.

“You can’t blame the people over there. She did have a little knock. People could see that she had had the knock. They can’t risk the money they are going to spend. We can’t blame them but it worked out brilliantly for us.”

After the mare recovered she was sent racing. In March 2019 Well Set up ran fourth out of nineteen in her maiden hurdle in Gowran and second of twelve in Limerick.

True to form, and with an eye of the well-being for their mare, the connections gave her the rest of the season off. They were back in September and with Ricky Doyle up she emerged victorious in Roscommon in a maiden hurdle.

Two weeks later she was second in a mares’ listed hurdle in Limerick. Next time in Cork she won her first listed race.

“We thought she would improve after her first time out but she has improved the whole way through,” said Mark.

The form of the horse improved dramatically and after winning once more in Cork the date 8th December is etched in the connections when Well Set Up repeated her victory at the same venue in a Grade 3 Novices Hurdle.

“You are holding on a bit but that day when she won I lost the run of myself. I started to run towards the racetrack. I was roaring when she ran across the line.

“It was so important for me. I am young. I needed to prove myself. It was coming at the right time. It was a great day for Ricky (Doyle). “We could have taken him off but myself and Jean had agreed he had done all the hard work himself , he knew her inside out and he deserved his chance.”

The disappointment of Tattersalls was way behind them now.

At the 2019 Christmas Limerick meeting a staying and galloping Well Set Up was edged into second place by Gordon Elliot’s, Fury Road.

“That is four wins, three seconds, nine runs and never out of the prize money,” summed up Mark.

There is a special relationship between owner, trainer and jockey.

“You have to give it to Mark and the jockey, Ricky Doyle. It was their first listed winners they ever had. Mark has done totally right by her and where he has placed her he has done brilliantly,” stresses Jean.

Mark has two people working in the yard for him, Darren Lawlor and Triona Burbage

“Triona does everything with the mare. She rides her out most mornings when Ricky doesn’t ride her. She is very good. Very conscious,” explains Mark.

“The mare is not easy to deal with. She is always kicking and biting. She has that bit of spirit about her but Triona is well able to manage her and correct her. She has the right balance.”

Jean appreciates how well her mare is cared for.

The horse is ridden out seven times a week and fed three times a day,” she enthuses.

“We are not finished yet,” says Mark.

“We plan to run in Clonmel in February and she is also going to get an entry in Cheltenham in the Albert Bartlett. She is already quoted in the betting and the entries haven’t even come out,” says Mark.

The Albert Bartlett is a grade one novice hurdle and is the race which immediately precedes the Cheltenham Gold Cup.

For the connections to even get there this would be their Field of Dreams. Yet the welfare of their mare will be paramount.

“Other people know she is good enough to go to Cheltenham but we wouldn’t go unless we had a bit of soft ground,” noted Jean while the trainer endorses the wishes of the owner.

That is why we said we are going to do everything right by the mare.

“If conditions were right we would go to Cheltenham. I am not saying we are going over to win but if we got into the winners’ enclosure we would be delighted. We don’t want to make up numbers,” says Mark.

“Whether that happens could all depend on how the mare runs in February at Clonmel.”

One cannot help but feel this story has a bit to go yet.

As a trainer or jockey, Fahey has never led his horse into the Cheltenham winners’ enclosure while as a rider he has been successful twice at the Punchestown Festival.

Well Set Up, who has already treated his connections to more than they could scarcely have imagined, has already been good for the local community too.

“The ATM of Tullow and Rathvilly,” quips Ger Kilcoyne.

The owner knows the dream will only become a reality if the ground comes up soft.

“Her quality is that she is tough out. We can’t put her on wrong ground where she would hurt herself,” emphasised Jean.

And if they were even to get a placing in Cheltenham?

“This is proof the small trainer and owner can do it,” says Jean.