A day after Irish racing announced that it would continue behind closed doors, Meath magician Sheila Lavery has stated that her charity race hero Quizical is on course for the first big race of the new Irish turf season, the Paddy Power Irish Lincolnshire, at The Curragh on the rearranged date of Saturday 28 March and that he “should be really competitive.” 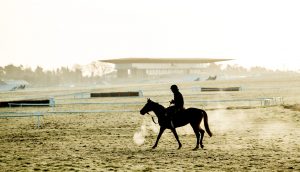 A horse and jockey on the Curragh Gallops just over a week before the first meeting of the season at the track
Photo: ©INPHO/James Crombie

This imposing son of Roderic O’Connor will forever be remembered as the horse that landed the Pat Smullen Champions Race For Cancer Trials Ireland at the same venue at last year’s Irish Champions Weekend, when multiple champion jumps jockey Sir AP McCoy partnered him to get the better of old friend and rival Ruby Walsh in a pulsating finish.

The charity efforts that weekend raised more than €2.5 million for pancreatic cancer trials.

Since then Quizical has been seen in public on three occasions, last time scoring by three and three-quarter lengths in a one-mile handicap at Leopardstown in October and he is a 10-1 poke with Paddy to score in The Curragh extravaganza.

Lavery said: “I think it took him ages to come into form before Leopardstown and when we had been running him, he hadn’t really got his ground. The more racing and work the better he gets and he’s in great form and I’m looking to having him run in the Paddy Power Irish Lincolnshire.”

The trainer has thought her charge tailormade for the Lincolnshire, in which he finished 11th last year at Naas, for some time and that effort can be forgiven.

“He’s an ideal candidate – he wasn’t ready last season because he had a stone bruise and missed three weeks so he went into the race really needing the run,” she explained.

“I think he goes on any ground from yielding to soft as long as it’s not tacky – I don’t think he likes that at all.

“I think given the way the ground is and he’s in great form, the feeling is he should be really competitive. I’d love to have given him a racecourse gallop but that’s not going to happen, but we’re lucky to be racing so I’m not going to whinge.”

The memories of that charity race will live with Lavery for a very long time.

She enthused: “It was just an amazing brilliant day – the whole atmosphere and bringing the jockeys together was superb. I suppose winning it topped it off but being a part of it was a major part of the enjoyment.”

Horse Racing to continue in Ireland under strict protocols