AN initiative by a group of Athy businesses in the teeth of the quarantine has secured daily dinners for 22 elderly people in the environs of the town.

Appropriately, the initiative in Athy is called ‘Community Spirit’ and was set up when a couple of local businesspeople noticed the deficiency, collected the money and got Mary Fennin-Byrne from the now closed Clanard Court onside to prepare the meals.

“I think we’ve 22 [service users] now who wouldn’t have support of families,

“For us, it’s only a matter of sourcing the supplies, as we’ve closed the hotel, and are now operating as a takeaway,” she said.

“We’ve had to let everybody off, short-term. It’s horrible really, but we’re all in it together, and if we reach out to the community and do a little bit of good, it’s as much as we can do,” she pointed out.

“A couple of businesses came together in this time of crisis, but between us all we can keep this going as long as required,” she pointed out.

Dan and Edwina Curtis got the ball rolling, and with the help of few others jangled a metaphorical tin around the town, and were answered to date by Petitt’s and Conlons, Kendra and Tegral, Flood’s and Wallaces, and more on the promise. 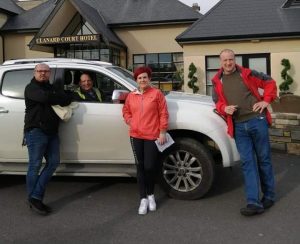 “Nobody’s taking advantage, they’re all old – one couple is 92 and 94 – we went out as far as Ballitore and Luggahcurren,” he explained.

“The community in Athy has asked ‘do you need a hand?’,” he said simply.

He went on to explain that they have enough delivery volunteers at the moment, because they want to maintain that continuity of contact with their elderly clients, and not concern them with any new visitors.

“We’ll keep this up til lock-down, or we run out of money, but so far that hasn’t happened yet. We have enough money for a month or so,” said Dan.

“If the lock-down comes we might have to shut down these deliveries, but for the foreseeable we’ll do them,” he added.
Along with Mary at The Clanard, Dan wanted to name-check the following for their efforts: Garda Sean O Mahony, Karen Mc Evoy, and Rafal Szeremeta.

Cllr Brian Dooley of the Lion’s Club explained that they also had the minor problem of substituting in youth for their mainly older membership, but having done this, have taken over pharmacy and shopping duties around the town in tandem.

“People have been extraordinary. It’s the best thing to come out of this,” he said.

“The younger members have really put their shoulder to the wheel,” he added.

“I have to say it’s very much under control and not overwhelmed, but we’ll see how it goes,” he cautioned mildly.