FROM THE ARCHIVES – ON THIS DAY 25 MARCH

ON this day in 1990, the Kildare senior footballers recorded a hard fought win over Wicklow in a Division 3 promotion play off in Dr Cullen Park in Carlow.

In front of a crowd of over 3,000 Wicklow were bolstered by the return of five players who had recently won an All-Ireland club final with Baltinglass but Kildare just about had the edge in a 2-9 to 1-9 win. 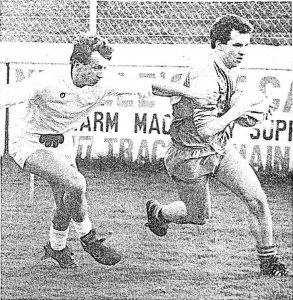 A goal from one of those Baltinglass players, Kevin O’Brien, gave Wicklow the lead inside the opening quarter but Kildare were back in the game just before half time when Tom Harris found the net after David Fennin’s shot had hit the post.

That meant that Wicklow led 1-4 to 1-3 at half time but that lead didn’t last long into the second half because Kildare took the lead after Paddy O’Donoghue and Liam Miley combined to set up Declan Kerrigan for Kildare’s second goal.

Kildare added three more points to go 2-6 to 1-4 ahead but with the finishing line in sight they began to wobble and went 20 minutes without a score. At one stage Wicklow got to within a point of Kildare and a comeback looked very much on but Kerrigan and Harris got crucial late points and Kerrigan eventually sealed a three point win. 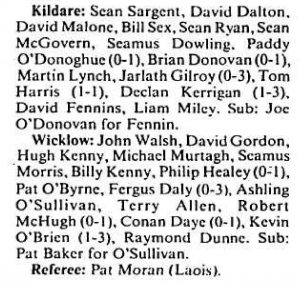 How Kildare and Wicklow lined up in 1990

However, the performance obviously gave Wicklow great belief and they would go on to gain their revenge later in the summer by beating Kildare in a Leinster quarter-final, a defeat that meant the end for trainer Pat Fitzgerald and ushered in the Mick O’Dwyer era in Kildare.

In the shorter term, the win set up a National League quarter-final for Kildare against Cork and a famous game when Kildare players scored a total of 7-12. Unfortunately, Larry Tompkins (1-5) and Shay Fahy (2-2) did their scoring in a Cork jersey and the All-Ireland winners ran out 4-10 to 4-5 winners.

Other notable Kildare games on 25 March down through the years include a 0-8 to 0-5 win over Mayo in a league semi-final in 1928. Kildare would go to lose the final to Kerry but that summer went on to become the first county to lift the Sam Maguire trophy, the last time that Kildare were confirmed as All-Ireland senior champions.

In 1984, Fahy and Tompkins were top form in the white of Kildare in a 1-4 to 0-6 win over Offaly in a Division 1 relegation play off. Fahy’s goal late in the last first half proved to be the decisive score in the win.

In 2012, Kieran McGeeney’s side romped to a 3-23 to 1-12 win over Westmeath in St Conleths Park. James Kavanagh scored 2-2 in the game and Mikey Conway (0-6), Eoghan O’Flaherty (0-5), Emmet Bolton (1-1) and Alan Smith (0-3) were also heavy scorers in the 17 point win. It was Kildare’s fourth successive win in the league and in their next game they clinched promotion to Division 1 after a late Johnny Doyle penalty earned a draw with Galway in Salthill.

The only defeat that Kildare have suffered on this date came in 2018 when Cian O’Neill’s team rounded off their Division 1 season with their seventh successive defeat when Galway were 0-16 to 0-10 winners in St Conleths Park.