Speaking to the Kildare Nationalist, Vivienne said that it was “breathtaking” to see the number of people who came out to support her at the launch, adding that the venue was perfect. She read two poems from the book at the event while her eldest daughter Lauren read one.

“It was a full house, absolutely thrilled,” she said.

While it’s a book of poetry, Vivienne has explained that it tells a story through three chapters. She found that writing helped her through some dark times of her marriage breakdown and proved to her that anything creative can help – a positive message in a society increasingly recognising the importance of mental health. 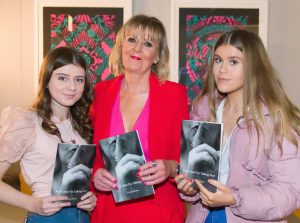 “It was really just my emotions and how I handled the devastation of the breakdown of my marriage,” she noted.

Vivienne added that she shares her work on social media and has been building a following, striking a note with readers. Writing got her through dark times, and she said that if she’s helping somebody else get through something, she’s happy.

Although this is her first book, Vivienne has clearly been busy with pen and paper, having built up a catalogue of 300 poems. Some of her work has been published by Harness Magazine in the US. “They’ve published about five of my poems, which has been a great honour,” she said. “I think my very first poem was when my brother died and I just wrote a poem one night… something big happens in my life, it triggers a poem or some sort of writing.”

When she writes, Vivienne pours her heart onto the page. “I don’t have any punctuation,” she said. “If there’s a mistake, sometimes I might leave it because it’s raw and that’s the way I want to express myself… basically it’s raw poetry as far as I’m concerned.

“I could listen to a sentence or conversation, I’ll pick a word from it and I’ll pop it in my notes on my phone and then I’ll build something on that.”