FROM THE ARCHIVES – ON THIS DAY 26 MARCH

KILDARE’S U21 footballers enjoyed a fine win over Laois in the Leinster quarter-final on this day in 2005.

Ballymore’s James Kavanagh was the star for Kildare in a narrow 1-10 to 1-9 win but Kildare had to do it the hard way after the home side took control of the game in the first quarter. 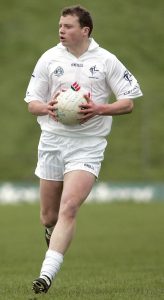 James Kavanagh inspired Kildare’s U21s to a win over Laois on this day in 2005
Photo: ©INPHO/ Tom Honan

A brace of points from Kavanagh briefly gave Kildare an early lead but a Peter McNulty goal helped Laois into a 1-4 to 0-4 lead by half time.

Kavanagh again scored an early brace of points in the second half but Laois looked destined for the semi-finals when McNulty restored Laois’ three point lead.

However, it was a day when Kavanagh just would not be denied and after his shot hit the crossbar his clubmate Tommie Archbold was fouled after collecting the rebound. Kavanagh took the resulting penalty and calmly found the net.

Archbold was then Kildare’s hero in the 58th minute when scored the winning point.

Padraig Nolan’s team went on to beat Meath in the semi-final before suffering heartbreak against Dublin in the final. A Ross Glavin goal in the 58th minute put Kildare on the verge of back to back titles at this grade but Dabhach Dineen grabbed an even later equalising goal and Dublin went on to win the replay.

However, it was a Kildare side packed with talent and the likes of Kavanagh, Daryl Flynn, Mick Foley, Padraig O’Neill, Hugh Lynch and Mikey Conway went on to enjoy excellent Kildare careers, and formed the backbone of the team through the Kieran McGeeney era.