STUDENTS from Rang 5 at Gaelscoil Átha Í launched a storybook they wrote, illustrated and published at Athy library on Tuesday 10 March. The book is an element of their project for the Our World Irish Aid Awards 2020, with the funds they raise from book sales earmarked for three climate action campaigns they decided on themselves.

“It was brilliant,” said Aislinn Nic Pháidín, a Junior Infants teacher at the school who took the students for the project. “They had a great night, it was very successful. I think they sold their first 41 copies of the book.”

The Our World Awards seek to enable students to learn about the lives of children and their families in developing countries, and how Ireland – through Irish Aid – and 192 other countries in the UN are working together to create a safer and fairer world and a better future for the world’s children. This year’s theme is ‘A Better World’, linked to the UN Global Goals.

Ms Nic Pháidín explained that the Athy students were inspired by the recent Australian bushfires and wanted to do a project relating to climate action. They had plenty of ideas at the start but each would require some amount of monetary support, so they decided to come up with a fundraising idea and settled on writing a book. 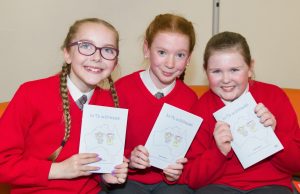 The group behind  Lá Te Sa Díthreabh (which translates to ‘The Hot Day in the Bush’) comprises author Nicole, illustrators Isabelle and Stiofan, and a project team of Ellie, Katie Marie, Lucy, Finn, Ruby, Charlie, Aoife, Milly, Caitlin, Emily and Clodagh. Set in Australia, the main characters in the book are two koalas and two kangaroos.

For anyone who wants to pick up a copy, the book will be available from the school office at a cost of just €6, when the school re-opens after the Covid-19 closures. Funds raised will go to three climate action campaigns which they hope to begin after St Patrick’s Day.

Malaí Maitheas, which translates to ‘Bags for Good’, will see them provide every family in the school with a pack of 50 paper lunch bags and urge them to use those bags for 50 days rather than tinfoil, clingfilm and single-use plastics. The hope is that afterwards families will make the switch for good.

The second campaign, Cosc ar Clúdaigh, originated from a discussion where student Milly brought up the blue shoe covers you get at the swimming pool, wondering if they’re recyclable. They discovered that they’re not and that there are no non-recyclable alternatives in Ireland. The students will write to every swimming pool in Leinster, asking them to either ban the items or put a system in place to reduce the amount of them – ideas have been floated including having a box of flip-flops available or a 20c charge similar to plastic carrier bags.

And, for every book sold, they’re going to plant a tree in the Australian bush.

Ms Nic Pháidín explained that all of those ideas came from the kids, and noted that the project is optional and students are putting in the work in their own time. “It’s great, we are very proud of them, that there is that interest there,” she said.