THEY say necessity is the mother of invention, but in the teeth of the Corona storm a Newbridge theatre group has come up with a novel way to continue to tread (virtual) boards by offering its members six online projects to get them over the hump of the virus called ‘The Quarantine Festival’.

“Often when we have restrictions imposed upon us we become more creative, and are forced to use resources we had forgotten about or had underused before,” said Peter Hussey, artistic director of the Crooked House Theatre Company at the Kildare Youth Theatre in the town, now the largest in the country.

“In Crooked House we have ceased all physical contact with others, and we are using the social isolation period to challenge our members to work together creatively on these six projects,” he said.

“Over the period from 17   March to 29   March we will host the   Quarantine Festival,   an online gathering of young people creating in multi-media, expressing their reactions to the current crisis, and making new work shared publicly online in social media channels,” he explained. 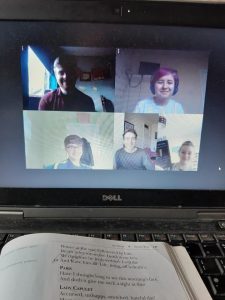 The first of these is called the ‘Closed Mic’ competition where all members can leave an allocated performance on Instagram to be viewed by fellow members.

Splendidly, their video competition is appropriately named Vid-19, where members are invited to submit a 40-second maximum video on a theme suggested by the registered participants, and made into a compilation at the end.

There is also to be a ‘Viral Words’ playwrighting project on Google Drive, with a final collaboration facilitated by Mr Hussey.

The theatre is also to host a podcast competition and a digital photo project to maximize members’ endeavours, with the winners announced on Sunday, 29 March when the Quarantine Festival will be livestreamed from each participants’ home.

The Kildare Youth Theatre has been operating in Newbridge since 1996, and has 110 members aged between 11 and 22.

“Because we’re free it save young people worrying where they might find €20, and so we get the full social spectrum of kids from direct provision to private schools,” said Mr Hussey.

All projects can be viewed by the public and further information can be had at the #CrookedHouseStaysAtHome section of our website   www.kildareyouththeatre.com