The show goes on for Drama Dynamics

WHEN Evelyn O’Sullivan knew that she had to suddenly close her live Drama Dynamics speech and drama school sessions because of the Covid-19 situation she says she ‘went into shock’. But that didn’t last long, as she got to look at alternative ways of keeping her more than a hundred students going with their courses.
“I was a bit stunned, and it took me a while to get my head around it,” she says. “A number of them were scheduled for exams, and I was very aware that I had an obligation to them and their parents. And it was just as important to keep the others going.”
As Evelyn scrambled for options, she began by getting the exam students to send in short WhatsApp videos of their practice work. “I felt I could send them back comments and help out there. It was to keep the connection up and that they didn’t feel I was abandoning them.”
But she realised quickly that more was needed. Not least to maintain some structure in the classes, as much for herself as for her students who range in age from 6-18.
“After some bouncing around of ideas with the Speech and Drama Teachers Association of Ireland, I decided to try the Zoom video conferencing app. I liked it because it would be signed into by the parents, so it was in family control. We were also given guidelines that all computers or tablets involved would be used in family rooms, where parents could be aware of what the children were doing.”
As part of that effort to maintain structure, Evelyn held the class sessions at the same late afternoon and early evening hours as they had been used to in her physical studio at Hillcrest in Kilcullen. Which has worked out well for all concerned, the sessions suiting the schedule already familiar to the families concerned. 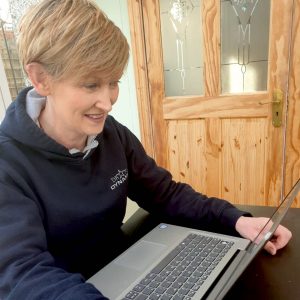 Getting to grips with the technology was initially daunting. “I have to say that I hardly slept at all the night before last Monday. I really didn’t know how it would work.” There were teething issues, mostly to do with the microphone settings at the students’ end. “By the finish of that first evening, though, everybody involved had the vision and sound sorted.”
Because they were used to performing their work, it proved relatively easy for most students to do so in front of a computer’s camera lens rather than at the studio session. In some ways, they learned new things. “For instance, I came away on a high after one of the senior acting classes, because they could finally see what I’m always saying, you act with your eyes, with your face. They could see each other doing this on the screen, and the penny dropped.”
A small number of students were uncomfortable with the video process, though, and Evelyn has been understanding about this. “I was nervous myself, so I totally get that. I suggested they get in touch directly with one of their friends who is involved and find out what’s going on. But it’s great that more than 90%of them are happy with it.”
As well as the young students, Evelyn has also conducted ‘rehearsals’ with her adult drama group, who had originally planned their annual production for performance in May. “Like the children’s exams, we don’t know when we will actually be able to put on the production, but in both cases we are working away until we get some clarification on the situation.”
This is a workaround in the pandemic, and it’s not perfect. Evelyn badly misses the direct interaction with her students ‘live’, and she knows that they miss the buzz group working in the studio. “For instance, we often get small groups to go and do their own improvisations, and they’d go to a different part of the studio and work on their own. They can’t do that on Zoom, have a bit of craic with each other.”
But lovely things have happened too, unexpected bonuses. “I have seen family pets walk into the room, younger siblings sticking their noses in, so the experience has been cool too. And the other advantage is that parents can see and hear what’s going on, which they don’t get when they drop their kids off for the normal classes.”
The adult drama class has also quickly adapted to the new system, and now that Evelyn is getting more at ease with the idea, it is working out well. “For instance, last week we rehearsed the first act of the play over the video, and this week we’ll do the next. And those not in a particular section can watch the others on their screens.”
Apart from the Drama Dynamics business side of it, the continuity and the daily structure are proving very helpful to all concerned. It’s also a way of the student groups themselves at least being able to say ‘hi’ to each other in the gallery view as everybody is signing on.
Who knows, when all this passes, there may well be inspirations for stories based on the local Covid-19 experiences. Certainly it will be a special year for ‘do you remember?’