IN these day of self isolation and being stuck indoors what better way to pass a few hours than to get lost down a YouTube wormhole. 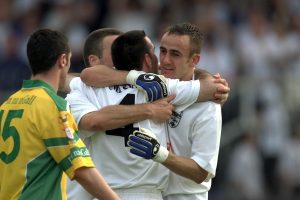 On one such trip down memory, one famous game at St Conleths Park quickly stands out so our question to you today is was Kildare’s qualifier won over Donegal on 30 June 2001 the greatest day at the Newbridge venue?

After Kildare were dethroned as Leinster champions by Meath in the semi-final on their previous outing, this game on a balmy summer’s evening was Kildare’s first ever Qualifier tie in the newly introduced back door system.

It looked like Kildare’s season was over when the Ulster side raced into a 1-5 to 0-0 lead but Kildare fought back in thrilling style. Martin Lynch scored a goal and Johnny Doyle clipped over five points as Kildare fought back to level up the scores going into injury time. It was left to the unlikely figure of Ken Doyle to score only his fourth, and last, Championship point to leave Kildare 1-17 to 1-16 winner.

As much as the fantastic game is remembered what really makes this game stand out is the size of the crowd and atmosphere around the ground that evening. Reports on the attendance vary in size from about 13,000 to 20,000 but one thing everybody agrees upon is that a crowd that size hasn’t been seen since inside St Conleths Park. Just look at the packed terraces!!

When talking about famous games at St Conleths Park the other very obvious contender was played on the same date 17 years later. Nobody will ever forget the hype and build up to the famous ‘Newbridge or nowhere’ game against Mayo in 2018 and Kildare back up all the big talk by their manager Cian O’Neill with an equally as famous performance on the pitch.

Another game that simply can’t be forgotten was the emotionally charged evening in 2010 when Dermot Earley lined out against Antrim on same day as his father’s funeral. The game finished in a draw and wasn’t the classic as the two aforementioned matches but it was a day when football was secondary in importance as the St Conleths Park crowd watched on in awe as one of Kildare’s best ever players paid tribute to his legendary father in the best way he could.

Obviously, many clubs have their own special memories of St Conleths Park but if we are to look solely at Kildare matches, was one of these three occasions your more memorable day at the Newbridge venue? We’d particularly like to hear from supporters of an older generation who might have memories of games in the 70s and 80s!