FROM THE ARCHIVES – ON THIS DAY 2 APRIL

FROM THE ARCHIVES – ON THIS DAY 2 APRIL

2 April is not a date that has been kind to Kildare GAA down through the years.

In the recent past, Kildare were beaten not once but twice on this date in Leinster U21 finals against Dublin – in 2015 and 2016. It was particularly hard luck on Neil Flynn who scored a total of 0-21 in the two finals and yet ended up on the losing side twice. 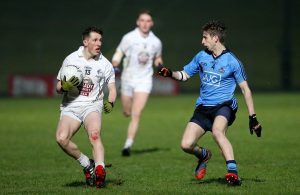 Neil Flynn on the ball for Kildare on this day in 2015 in the Leinster U21 final
Photo: ©INPHO/Ryan Byrne

In the first of those games Flynn was joined in a potent looking inside forward line by Niall Kelly and Chris Healy. Mark Sherry, Paschal Connell, David Hyland, Paul Mescal and Brian Byrne were among the stars on the team that year.

Of course, Dublin were strong too could name the likes of Eoin Murchan, David Byrne and Niall Scully in their team and their full forward line wasn’t either – Cormac Costello, Conor McHugh and Colm Basquel.

The game was tight for the opening 20 minutes but Dublin took control with two quick goals from Basquel and Costello.

Despite that blow, the confidence of Flynn’s place kicking helped Kildare gain a foothold in the game and they were right back in the game when Mark Sherry found the net before half time to leave the score at the break 2-5 to 1-6.

Flynn was even better in the second half and after Kildare scored four points in a row they led by two going into the last quarter but Costello’s second goal broke their hearts and Dublin eased to a 3-10 to 1-12 win. Despite the loss, Flynn’s display was rightly recognised by him claiming the man of the match award.

12 months later to the very day, Kildare and Dublin were back in Navan to meet again for turned out to be a truly great game.

For Kildare, Flynn and Healy were still on the inside forward line and were joined by Ben McCormack. Future senior stars Con Kavanagh and Conor Hartley were the wing forwards and their Sarsfields clubmate Shea Ryan was centre back. Elsewhere in defence, Paul Mescal, Darren Maguire, Eoghan Bateman, Ryan Houlihan and Brian Byrne lined out behind a midfield partnership of Paschal Connell and Luke Flynn. The likes of Mark Sherry, Rory Feely and Mark Hyland would enter the game later as substitutes. 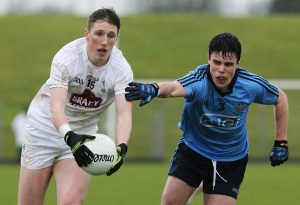 Neil Flynn gets away from Martin Cahilan of Dublin in the 2016 Leinster U21 Final
Photo: ©INPHO/Lorraine O’Sullivan

Dublin were no slouches themselves and lined out with Brian Howard, Con O’Callaghan and Colm Basquel in their starting team with Eoin Murchan and Paddy Small among their substitutes.

Kildare were sensational in the opening 25 minutes and the brilliant Ben McCormack scored five points from play as Bryan Murphy’s team raced into a 0-9 to 0-2 lead.

But Dublin rallied in the last five minutes of the half and an O’Callaghan goal helped them cut the lead to 0-10 to 1-5 by the break.

The game really came to life early in the second half and both sides enjoyed good spells but just as in the previous year Kildare led by two going into the final quarter.

Dublin then scored three in a row but once more Flynn was proving to be a real thorn in their side and he levelled up the scores in the 54th with another supberb score.

That proved to be the last score of normal time but was far from the end of the excitement as both teams pushed hard for a winning score. Kildare came closest, Mark Sherry was inches, just inches, away from being Kildare’s hero in injury time when his shot flew just past the post.

Two more Flynn points put Kildare in charge in extra time but the crucial moment came in the 69th minute when Killian O’Shea got in for a goal.

O’Callaghan added a point to push Dublin three clear and despite the very best efforts of Kildare in the second half of extra time Flynn’s tenth point of the game was all they add on and it was heartbreak for the second year in a row.

Kildare’s U21s did win this date back in 2005 when goals from Mick Foley, Padraig O’Neill and Ross Glavin helped Padraig Nolan’s team qualify for a final after a 3-16 to 0-7 win.