THE Coronavirus pandemic is affecting pretty much every person in the country and further afield too. There is barely a person whose everyday life has not been turned upside down by changing work environments or restrictions on when they can leave their house.

The size of the problems vary from person to person and the cancellation of some football fixtures pales into insignificance when compared to the absolute heroic work that is being done by so many key workers around the country as we face into some of the toughest times we have ever known.

But unless you are in the bubble of a team striving for a particular goal and have seen the individual sacrifices that are made on daily basis to try make the team the best that they can be it’s hard to understand the impact that the loss of football can have.

The Kildare ladies football team have endured some really tough years since their All-Ireland Intermediate final win in 2016. They went all of 2017 without a win and although things improved slightly over the next couple of years it was still a real slog for everybody involved.

That changed this year. A lot of the younger players on the team had grown up through those turbulent years and were the better for them and they were bolstered further by the return of experienced, quality players like Mary Hulgraine, Erica Burke and Roisin Byrne.

Suddenly, things clicked for the Daniel Moynihan managed team and they returned to a level not seen since that glory year of 2016. They flew through the five first rounds of the league and a win over Roscommon on 8 March meant they qualified for the league final with two games to spare and were very much on course for a return to Division 2.

Then this cursed virus struck and the country gradually went into lockdown.

Two weeks ago, the LGFA took the step of cancelling many of their fixtures for 2020, including all National League games, rendering Kildare’s efforts null and void.

Compared to the GAA, who have yet to make a call on whether the mens National League games will be finished, it was an early decision and Kildare captain Grace Clifford, although she can see the reasons why it was made, is unsure whether it was the right call. 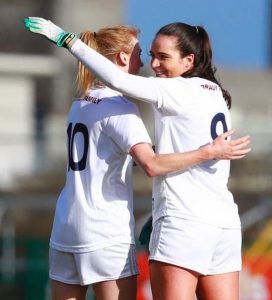 Kildare captain Grace Clifford celebrates with Erica Burke after Kildare’s win over Roscommon qualified for the Division 3 final but their efforts count for nothing now
Photo: Karl Gormley

“You could look at it two ways,” said the Eadestown midfielder.

“I suppose it’s almost inevitable that the mens league will go but we were finding that league final almost as a motivation to get through these times. Just for mental health and that kind of thing, it helps keep the buzz among the group, it was lovely to have that league final to aim for. I was quite surprised, the LGFA do really good work and I couldn’t criticise the work they do but maybe it would have been an idea to do it the way that the GAA are doing it. Obviously there is a question mark about what structure there will be for the Championship but the way that they have done it you’re left thinking will there even be a Championship. The way that the GAA have done it, it looks like there will definitely be a Championship and they will see about the league in a few weeks,” she said.

Clifford is used to an action packed lifestyle which involves finding the balance between work, football and a personal life and there is a balancing act to be found when all that is taken away.

“These are tough times for everybody, not just people in sport, but this is such a change in our lifestyle in such a short space of time. All these little things make a difference. When all your life is based around working towards a goal with a team…it was a really tough day for all of us when we were told that it was gone, even though we all probably knew in the back of our minds that it was going to go. Everybody will have their own their opinion and some will say that it was better to make the decision early but it was just nice to have something to focus on when you are sitting at home,” she said.

This crisis will eventually pass and teams will return to the pitch. Hopefully that will happen in time for some sort of Championship to happen and if that is the case teams will need some time to find their feet again before those big games are played and Clifford wondered if the remaining rounds of the league could not have been run off as preparation games ahead of Championship.

“I think we will get the green light to go back. I’m really positive about that, I think as a country we are really buying into what we are told to do and I do believe we will get back up and running. I won’t care if we have to play four games a week when we do! Everyone will just want to play football if we get the green light. We are going to need a month, or close to it, of training before we play Championship and the league games could have been ran off as preparation for the Championship, which is what the league is anyway. Maybe it was just a little bit early with the decision, but then again, maybe they think they are being respectful towards the players by letting them know early. You could look at it both ways but for me personally I wouldn’t have minded the idea that there was a glimmer of hope of playing the final,” she said. 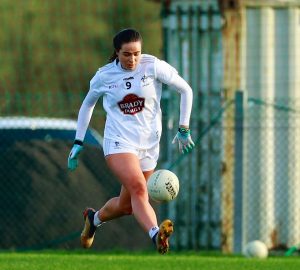 For a team who has struggled through the last few years, and Clifford had her own problems when missing a year because of a cruciate injury, this disruption is particularly hard to take when it comes just as the team was taking off in an upwardly trajectory.

“If this happened last year when we were having just an okay league season you’d just say ‘right, we’ll take it on the chin’ and move on but when you are on a winning streak and everything was just getting better and better, it was so exciting. Training was brilliant, everybody was looking forward to every session, for everything to be just taken away so quickly…We had just beaten Roscommon and were in a great position and confirmed to be a league final with two games left. Then to be notified of this…look, it’s out of everyone’s control and that is the biggest thing about it. Everybody is in the same boat, everybody would love to be back playing as soon as possible. It’s important to keep doing what we are told by the government because the quicker we buy into it the shorter the time we’ll by away from it,” she said.

Aside from the disappointment of that league final being take away from the team, Clifford is actually very positive about the situation. The commute from her home in Eadestown to her work place in Leinster Appointments in Naas was never the most time consuming but she has learned very quickly to adapt to working from home.

“I’m a real stickler for routine anyway, I need that or otherwise I’d really be gone off track. From 9am-12.30pm I’m just working then I get out for a run then I come back and finish off work in the afternoon then go for a walk or a home gym session. All these things are keeping me sane, I think I could be fitter now than ever before, I’m doing two sessions a day!

“I’ve a gable end wall, that’s an essential. The roads are fairly quiet and there are fields too for runs, I suppose we are lucky in a way, Ireland is quite rural so a lot of the girls are the same, a lot can still get out and do a bit. Communication and keeping in touch with everybody is important too, it’s tough times for everybody but our Whatsapp group has busy just to keep the communication and motivation on track. All the work that has been put in since November, you could look back and think it’s so disheartening to be in this situation but we’ve just got to keep going and keep everything on track and everybody is pulling together which is great. I think this could even bring the team closer together.

And while we all crave a return to normality this new style of living has it’s bonuses too.

“It’s gone from working Monday to Friday and rushing to training straight afterwards and just constantly being on the go. In a sense, there is almost a positive to it in that I’m at home, I can take in the surroundings. I’m blessed to be living in Eadestown, okay, the signal and internet isn’t always the quickest and that can be a bit frustrating but other than that I can get out for a run or as many walks as I like and it’s quiet. I’m taking advantage of the area and having that time at home. Normally life is so hectic…but look, you want to get back to that as soon as possible as well,” said Clifford.