ON his day in 2014 the curtains came down on one of the all-time great careers when Johnny Doyle pulled on a senior Kildare jersey for one last time.

“It seems ludicrous that John Doyle’s wonderful football career could come to an end after a meaningless league game in Newbridge but then it’s typical of the man that he would bow out in such low-key fashion,” wrote Brendan Coffey in the Kildare Nationalist at the time after Doyle announced his retirement following a win over Westmeath in St Conleths Park. 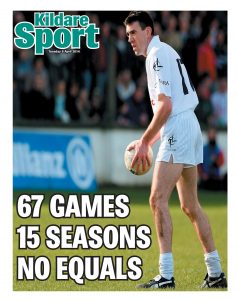 “He was an unheralded debutant in his first championship season and so there were no trumpets to signal his departure. He left almost as he had arrived – quickly and quietly. After making what would be his final appearance as a 62nd minute substitute against Westmeath, Doyle left the pitch without any fanfare. There had been a big cheer upon his introduction but that was merely a reflection of his standing with the supporters. They didn’t know they were cheering him for the last time.

“Doyle’s arrival on the pitch added some colour to a dull afternoon but everything seemed to turn grey when news of his retirement filtered out of the home dressing room. Some players had to be called back inside to hear the announcement, unaware that the elder statesman of Kildare football was about to bid them farewell.

“He spoke with a heavy heart but he kept his emotions in check – it had been his great pleasure, afterall, to have been in that dressing room for so long. None of his teammates were around in 1999 when he made his league debut against Derry along with Terry Rossiter, Ronan Sweeney and Mark Millham. Sweeney survived until last year but by then he had slipped out of the starting team. Doyle was still leading the line up front and when he returned to the fold last week in Derry, he didn’t look out of place.

“Now for the first time since 1999, after a run of 67 consecutive championship games, Kildare will enter the summer without him. His unbroken service is testament to his physical and mental strength but he was always chosen on merit. No one worked harder than John Doyle to be good at football and no one worked harder to improve each year.

“Although he won a Leinster title in his first season, Doyle’s career never scaled such heights again. He came close in 2002, 2003 and 2009 but the vast majority of his career was spent far away from the limelight. His 2010 all-star award was, in a way, recognition for a body of work that had spanned a decade. Through the course of a turbulent period in the history of Kildare football, Doyle had not only remained steady and constant but somehow seemed to get better with each passing season.

“For a long time, his name was a byword for Kildare football but it was a label that didn’t sit well with him. He didn’t play the game for individual acclaim. “There was a perception out there that if I wasn’t scoring we were in trouble. Lads got fed up of that, we had more strings to our bow than that. Looking back a lot of my scores would have come from frees that other lads won,” he said in an interview from 2009, which was the beginning of an Indian summer in Doyle’s career.

“He turned 31 at the beginning of that season but in many ways he was starting over again. Success still eluded him but some of his greatest displays in a Kildare shirt came during the following five seasons. It was a remarkable run at a time when the game was getting faster and the players were getting younger.

“Doyle was not the greatest player of his generation but you sensed he would have held his own in any era. Doyle was that rare gem, a fine footballer who turned himself into the ultimate sportsman. He was not the best at any one thing but he didn’t lack anything. He could score, he could set up scores; he could win his own ball, he could fetch ball above others; he was a team player but he was also a leader. How could you leave him out of any team?

“When he began his senior career in an ill-fitting Kildare jersey against Louth in 2000, John Doyle was a curiosity. Not good enough for the county minors, he made no major impression as an under21 either. He was so scrawny, his jersey was swimming on him when he made the cut with the seniors. And yet he became indispensable over time. The really amazing thing about John Doyle is what he turned himself into. He gave it everything just to be a Kildare footballer. That’s what supporters could see in him every time he played and it resonated deeply with them. You always got the sense that John Doyle was one of Kildare’s biggest fans. Maybe that’s why he became the player he did,” concluded Coffey. 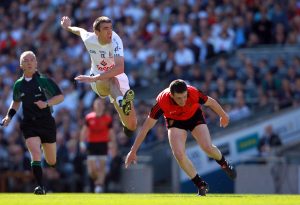 Johnny Doyle gets a shot away against Down in the 2010 All-Ireland semi-final
Photo: ©INPHO/Donall Farmer

Ger McNally looked over some of the details of Doyle’s wonderful Kildare career.

“Doyle’s first championship score came in his second game when he finished with a tally of three points in an 0-11 to 1-8 draw against Offaly in a Leinster semi-final. He went on to score in the next three championship games, including the Leinster final replay win over Dublin which turned out to be only medal of real significance with Kildare. The All-Ireland final semi-final ended in disappointing fashion, a 2-6 to 0-15 defeat to Galway but it was also notable for another reason – Johnny failed to get on the scoresheet. It would be another 50 championship games and 11 years before that happened again. 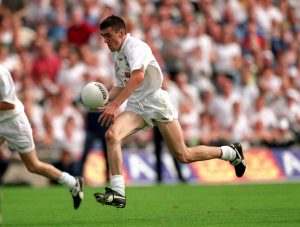 Johnny Doyle on the ball during his debut season of 2000
Photo: ©INPHO/Patrick Bolger

“In 2001, Doyle scored nine points in four games in a frustratingly short summer for Kildare. 2002 and 2003 saw Doyle’s reputation grow and Kildare reach successive provincial deciders but he couldn’t add to his only Leinster medal and it was the beginning of a forgettable period in Kildare GAA history.

Kildare suffered defeat in both their championship games in 2004 but Doyle’s eight points in the qualifier defeat to Offaly in St Conleth’s Park proved without doubt that he was on his way to being a very special player. 2004 also saw one of the crowning glories in Doyle’s career when he led his beloved Allenwood to county final glory.

“2005 was another summer to forget for Kildare but Doyle did net his first championship goal in the second round qualifier defeat to Sligo. In the following two seasons, he scored 2-31 in just six championship games as Kildare enjoyed a tough period before the arrival of Kieran McGeeney.

“The arrival of the Armagh man in 2008 brought a new lease to many within the Kildare set up but none more so than Doyle. That wasn’t initially the case as Doyle registered just three points in a disappointing Leinster defeat to Wicklow but eight points in the first round of the qualifiers against Cavan was Doyle at the top of his game. He would go on to be the first man to score over 100 points in the qualifier series and he hit tallies of 1-5, 0-6 and 1-5 in the remaining three games that summer on his way to becoming top scorer in the championship.

“2009 was close to the peak for the McGeeney era and Doyle was at the heart of the Kildare team as they were involved in one of the best Leinster finals of the new century against Dublin. However, Doyle and his team mates were left distraught as they lost that game and then had their interests in the championship ended at the All-Ireland quarter-final stage at the hands of Tyrone. 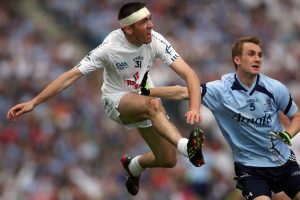 “Now that the book has closed on Doyle’s career, 2010 will be the year that will be remembered with most regret. This was the mercurial Doyle at his best and he scored 1-49 in eight championship games to again finish as the country’s top scorer as Kildare overcame a Leinster quarter-final defeat to Louth to go within inches of an All-Ireland final. The All-Ireland semi-final day was one of heartbreak for Kildare, from Tomas O’Connor’s wrongly disallowed goal to Johnny being led from the pitch in floods of tears after Rob Kelly’s late free had crashed against the bar. One memory from that game lingers, near the end when Kildare desperately needed some inspiration, Doyle seemed to almost rise above the Hogan Stand to claim a ball that a midfielder six inches taller than him wouldn’t have expected to win. He stretched every muscle and sinew in his body to win that ball but ultimately no matter what he put his body through, it wasn’t enough to guide his team to victory when it mattered most and that proved to be a microcosm for his Kildare career. His performances that year earned him a much treasured and much deserved All-Star award but Doyle was never one to chase individual honours, it was all about the team glory for him.

“2011 proved the selflessness of Doyle when he once again put the team’s needs above his own. With various problems at midfield, Kildare again turned to Doyle for inspiration and as always he didn’t let anybody down. With Doyle at midfield, Kildare were seconds away from forcing a replay against Dublin in a Leinster semi-final before a controversial refereeing decision. The team then lost another game for the ages in the All-Ireland quarter-final against Donegal. That loss to Jim McGuinness’ team also brought to an end Doyle’s run of scoring in 50 successive championship games.

“Kildare never reached those heights again in the final two years of McGeeney’s tenure but Doyle was a constant presence. Somebody who could still be relied on to deliver on the pitch but also an invaluable member of the dressing room amongst a squad with a number of talented young players. Many of those young players have got on record to say how big an influence Doyle was to him even before they joined up with the Kildare squad. Once they did, they realised that Doyle wasn’t just a legend of a player but he was also a legend of a man.”