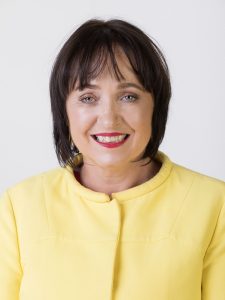 “Obviously, having just come out of the General Election campaign I was exhausted, but I found it humbling to meet so many people committed to their communities, to meet the public representatives around the country,” she said.

“Logistically it was very difficult. I had 280 Fianna Fáil representatives, and 200 Independents. I can’t say how many I met, but I communicated with all of them,” she explained.

One positive side effect of her campaign was re-discovering the beauty of Ireland, and she name-checked her travels in Donegal, Achill, Sligo and Leitrim.

“I remember thinking to myself: ‘I’d love to do this all over again in the summer’,” she admitted.

“I suspect that after the coronavirus we’ll have a lot more domestic tourism,” she predicted.

“People were saying this was going to be my most difficult campaign, but I didn’t find that, it as enjoyable plugging in to the people,” she said.

“It’s a different mandate now, it’s not from the people of Kildare South. The role is different in the Senate,” said the new Senator.

“We’re going to have a very different type of Dáil and Seanad – new challenges and new horizons,” she said.

“I’m glad to be back in public life, and I will continue to work as hard as I can as a public representative, and I look forward to legislation I worked on in the Dáil coming through the Senate now,” she admitted.

Senator O’Loughlin predicted a new Government “in the next two weeks…[because] we will need more legislation [to deal with the virus]”.

“When you think of the huge spending decisions being made, we will need a mandate to govern,” she said.

“Some of the biggest decisions are being made since the Dáil was formed. It’s seismic,” she pointed out.

“Whatever is decided we all need to pull on the green jersey,” she said in an appeal for continued national unity, and also predicted a surprise coalition possibility.

“Alan Kelly [new Labour leader] will be jumping up and down to get into Government, and fair play to him,” said Fiona.

“In these times of inevitable fall-out, it would be best to have a stable government, a new government, whoever that is,” she said.

“It’s all shoulders to the wheel because it’s going to be the toughest time to be a public representative, but I’ve never shirked from making tough decision,” said the Senator.

“I’ve learnt a lot in the last four years in the Dáil to be a senator in the 26th Senate,” she ended.

Senator O’Loughlin (54) sat as a Fianna Fáil TD from 2016 until February, when she narrowly lost her seat on transfers, despite polling third on first preferences behind Patricia Ryan and Martin Heydon.

As a former teacher, she served as Chair of the Committee on Education and Social Protection during the last Dail, and was a county councillor for the preceding 17 years, including a stint as Cathaoirleach.

She was first elected to the now defunct Newbridge Town Commission in 1994.

The eldest of 11 children, Fiona came from a political family whose grandfather was in the very first Kildare County Council back in 1898.

She started teaching in Scoil Mhuire Junior in Newbridge back in the 80s, and worked full time with charitable organizations since 2000, first with People In Need and then with the Special Olympics.

Fiona helped put together the national scheme that saw towns and villages all over Ireland host delegations of athletes with intellectual difficulties from 177 countries for the 2003 World Games, held in Ireland for the first time.

She was especially proud that Newbridge, her base now for three decades, won the award for Best Host Town for the welcome they bestowed on the Japanese delegation.

Following these hugely successful games, Fiona helped to develop the legacy programme which has helped set up 420 Special Olympic clubs across Ireland, including three in Kildare.

She now works with other European countries to develop their programmes and lobbies on behalf of people with intellectual disabilities to the European parliament and commission., and has helped secure grants totalling  €13.5 million for Special Olympics Games and events all over Europe.

Protests have given victims of racism courage to speak, organiser says ahead of Dublin rally