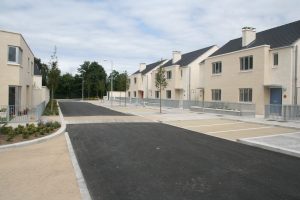 THANKS to the initiative of its residents, a Sallins housing estate is set to become the first ‘Age Friendly’ local authority estate in the country – the Castlefen estate nestled between the Liffey and the Clane Road.

“This will create a more cohesive and inclusive community where all residents can walk about and move with ease, accessing the amenities and public realm and wider town supports, making Castlefen a great estate in which to grow old and age in place,” said Alice Corbett, the manager of the Kildare ‘Age Friendly’ programme.

This they began by publishing an Age Friendly Walkability Audit carried out recently in the estate.

Castlefen has a population of 526 persons, with eight per cent over 55 years old and seven per cent with a registered disability.

In contrast, half (51 per cent) of the population are between 20 and 55, which would indicate a likelihood of a larger older population in the estate in the future. 10% of residents in Sallins is registered with a disability.

During the research phase of this audit it became clear that Castlefen has a larger number than average of older residents and people with disabilities which makes its implementation even more important.

Starting with footpaths, walkways and age friendly parking the residents wanted Castlefen to be more user friendly, and their community centre be more physically accessible, whilst also providing every comfort while they are there. They are striving to make the experience of their older people as totally inclusive as possible.

“The whole community supported this project and all of the improvements carried out to date were as a result of needs identified by the older residents themselves,” said Alice.

“We had intended having a launch of this Audit in April but in light of our current difficulties we are postponing it for now”.

Castlefen Residents Association is also responding to the needs of their older population in relation to Covid 19 by putting measures in place  such as calling older residents by phone (were previously knocking in to see them) just to check in to make sure they are all ok.

“They just have a little chat to reduce the feeling of isolation and fear as best they can. They have also taken on to send a postcard each to the older residents in the estate and are currently distributing relevant flyers and posters to residents,” said Ms O’Rourke.