EVEN without any live sport there has been no let up here at the Kildare Nationalist and we’ve been working hard to provide interesting reads before your sport of choice returns. So this Easter weekend pull up a chair, grab a cup of tea, and catch up on some of the stories on our website that you might have missed during the week. 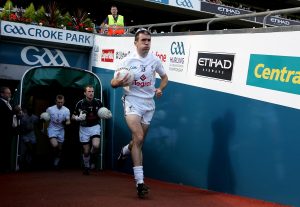 Last Monday was the sixth anniversary of the last time Johnny Doyle played a senior game for Kildare so we took a trip down memory lane to revisit what Brendan Coffey and Ger McNally said about the great man at the time of his retirement.

Jim Crawford, a Kildare resident in Ballyshannon, Suncroft for almost 20 years and somebody who is a well known face around his locality, was named as Stephen Kenny’s replacement as Ireland’s Under 21 manager and he spoke to Ger McNally after his appointment on a wide range of topics as he looks forward to taking charge of this talented group.

Anybody who watched the RTE tv show Special Forces: Ultimate Hell Week will have seen Naas boxing coach Niall Barrett being pushed to his absolute limits but shining under the pressure. He gave brilliant detail about his preparation for the show and how he survived the week.

Richard Commins, otherwise known as @kildaregaa365, has been writing a detailed series about the 1965 Under 21 All-Ireland winners and how they fared in the years that followed. You can read the second of the three part series here, if you missed the first part you can catch up here.

We’ve grown accustomed to sporting cancellations in these unprecedented times but few will hit Kildare harder, from a sporting and economic point of view, than the cancellation of the Punchestown Festival. Punchestown CEO Conor O’Neill told us about the impact that will have.

We delved into the archives to dig out a brilliant 2017 interview with Greg O’Dowd. The former pro footballer spoke in revealing detail about what life was like, and it wasn’t all pretty, as a young apprentice at Brighton Hove and Albion in the late 80s. O’Dowd went on to have a League of Ireland career lasting over a decade before taking over at Newbridge Town as player/manager. It was an injury suffered during this time that set him on the road to a career change and he is now a sports therapist, and looks after some of the best jockeys around. Read his entertaining story here.

Athletes all over the country are having to adapt their training schedules to new normal and League of Ireland star Rory Feely spoke to Daire Walsh about how he is coping.

On the GAA front, everybody is still hoping that there will be some sort of Championship this year and Kildare S&C coach Ross Dunphy has been working hard to devise a training programme that will ensure the players are still in shape when they eventually return to the pitch.

Also, if you missed it, David Hyland told us that he would be happy to see a knockout championship if that was the only way that games could be played this summer.

There was huge disappointment though for the Kildare ladies when they LGFA announced that they were cancelling a number of their fixtures for this year, which made the National League null and void. Having qualified for the Division 3 league final with two rounds to spare it was hard for the team to take and captain Grace Clifford wondered if the decision had been made a little too hastily.

We’ll keep working hard over the coming weeks to bring you stories of interest around Kildare so keep calling back to this website right throughout the lockdown!