Have boots will travel

FOOTBALL has brought Kilcullen’s Stephen Lawless all over the world and as he tells Ger McNally he was thoroughly enjoying his latest adventure in New Zealand before the Covid-19 pandemic brought the season to an abrupt end. 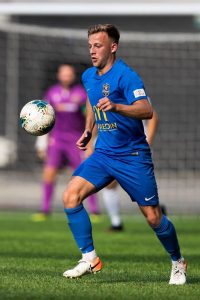 IT’S funny how life can take you a different path than you expect.

Although Kilcullen’s Stephen Lawless was enjoying his time in Dunedin on the south island of New Zealand working as S&C coach with ISPS Handa Premiership club Southern Utd, he began to yearn for a return to playing himself.

Still only 26, the former Newbridge Town man made the breakthrough to the League of Ireland with Wexford Youths last summer and although work took to him to the far side of the world he wasn’t ready to give up on his playing days just yet.

When when he went for a chat with the club’s manager Paul O’Reilly, he was in for a shock.

O’Reilly was previously the FAI co-ordinator of the BA Sport & Exercise (Soccer) course in IT Carlow for six years so Lawless knew him well from his five years in the college but he wasn’t expecting what was coming next.

“We were having a chat about what was coming down the line. I told him that I wasn’t really sure about staying on because I wasn’t ready to give up playing football and he said ‘funny enough you should say that, I’m signing you after Christmas’. He literally put it to me like that,” laughed Lawless.

Matchday squads in the top flight of New Zealand are restricted to five imports but a series of injuries left the door ajar and suddenly Lawless was thrust into action.

“One guy I live with played professionally with New York City, played with Pirlo and David Villa there, but he had terrible hamstring injuries so he was an import player that wasn’t fit and there was another one or two others that weren’t fit. I was signed as back up but in the first game after the Christmas break we were playing live on television in a 35,000 seater stadium and I made my debut,” he said.

There were eight games after Christmas before the league was shutdown due to the worldwide pandemic and Lawless played them all and was starting to get used to the idiosyncrasies of football in the country.

“There is a lot of travelling because of the geographics of it all, there are the north and south islands, every second week you are flying for a game. It’s a big commitment but it’s not full time.

“As a player I was never accustomed to the challenges that a team who has to travel of stay in hotels would have. For a game that we won 4-3 against Hawkes Bay Utd, we were up at 4am for a 5am flight to land on the north island and then catch another flight and then a bus for a 1pm kick off. You’re drained and shattered but those kind of trips are great for bonding all the lads together,” said Lawless.

Although his debut was made in Southern’s fantastic 35,000 capacity Forsyth Barr Stadium, not all teams had facilities like that. 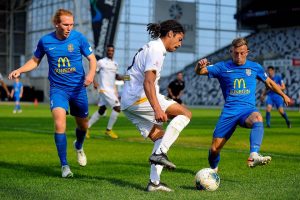 Lawless (right) closes in to make a block
Photo: PhotosportNZ

“New Zealand is the most unique footballing experience I’ve ever had. It varies so much, you could be playing against Kiwi internationals one week on Sky TV but then the next week you could be playing against the best team in the league but it’s in a public park, it’s just a mad league. It’s a lot more possession based but I think if you are an Irish player with a bit of physicality about you then you end up doing well,” said Lawless, who also spent time in Sweden on an internship with the famous Malmo club.

Just as Lawless felt he was finding his feet with the team and in the league, the plug was pulled due to Coronavirus.

“We finished up after playing 16 games and I was lucky enough to play in eight of them since Christmas. I hadn’t played for four or five months before that, since my time with Wexford, but by the end of it I was starting to feel really sharp and I was starting to grasp the level.

“It’s a bit of anti-climax. We were thinking we had six games left and wanted to give a big push to end the season. You’re training away, all set for a trip away to Auckland City, the reigning champions, who have fellas who have played pro in South Africa and Japan and places like that and then all of a sudden the league is scrapped.

“It’s certainly a disappointment and when it all blows over we’ll certainly be thinking it was a real pity to not get a good blow out with all the lads at the end of the season. It’a a pity alright but you just have to be mature at these times and think of the bigger picture,” said Lawless.

With his contract due to finish in May, he will look to move on to his next adventure but he is happy with the route that he has chosen,

“I’d be still mates with Eric Molloy (one of the original group of players who came over to New Zealand to play under O’Reilly and who is now playing in Poland) and the laugh we’d have is that there are definitely opportunities abroad, not across the water, but for fellas who go the very, very long way around and stick with it.

“I’m just doing up a highlights video now and am going to send it around to different clubs. I don’t know if I see myself in New Zealand long term, my visa is up in September. There is an Irish guy, Conor Nestor from Limerick, and he is the manager of the Cambodia National League champions, which sounds mad as well, but I might give him a shout and see where it takes me.

“I’ll probably never make a red cent out of playing football but there will be a day sometime when I can’t play anymore. The obvious thing would be to focus on the career and get up the ladder, I have been lucky that I have been able to add to my CV as I’m going along, but I think while I’m still this side of 30 I’ll give it a lash and see where it takes me,” said Lawless.