THE first League Cup final in the history of the KDFL paired Division 1 side Suncroft and Robertstown of Division 2 at the end of the 1994/95 season.

The very first final pairing was to become a familiar theme over the 25 year history of the competition with a lower division team going up against higher ranked opponents without a care for their status or reputation.

Any chance that Suncroft would have taken their lower ranked opponents lightly were surely banished in the semi-finals. At time of their semi-final against Eleson Utd, Suncroft were still in the running for at least second place in the top flight, they eventually finished fourth, but they were given an almighty fright by a side who would eventually finish runners up in Division 2.

There were no goals in the first half of the game but it was Suncroft who were more relieved at that scoreline after an opening 45 minutes dominated by Eleson. An experienced Suncroft side did improve after the break and opened the scoring through Leo Foy. Eleson had their chances to equalise before Foy scored his second but Eleson stayed right in the game until a late David Stynes goal completed a flattering 3-0 win for Suncroft to book their place in the final.

On the other side of the draw, Robertstown, who finished the season third in Division 3, showed that they weren’t a team to stand back and admire teams from a higher division when they recorded something of a surprise 1-0 win over Milltown, a mid table Division 1 side. While the result may have been a surprise, it was was a deserved win and the margin could have been greater but for a fine display by Milltown goalkeeper Paddy Tierney. In the end a first half Thomas Ennis penalty, after Joe Bowers had been fouled, was enough to secure Robertstown’s place in the final.

So, the first ever Kildare League Cup final was set for Ryston on 30 April 1995.

Although Paud Moore came close to an early goal for Robertstown, Suncroft did much of the attacking in the opening half. David Stynes, Tom Confrey and Paul Hanley were causing problems but the Robertstown defence was marshalled superbly by veteran Johnny Moran and those around him – Fergal Dobbins, Davy Greville and Ronan Kavanagh.

The ‘Croft pressure kept building and they went close to an opening goal when powerful striker Foy headed Confrey’s cross onto the post.

It wasn’t all one way traffic though and Suncroft full back Gary Sinnott was needed to clear a Joe Bowers shot off the line.

The deadlock was finally broken by Robertstown eight minutes before half time and the ever- lasting honour of scoring the first ever goal in a Kildare League Cup went to a man who went on to become better known as a referee. Paud Moore set up Liam Carthy for a shot from outside the box and he delightfully curled his shot past Larry Hanlon. 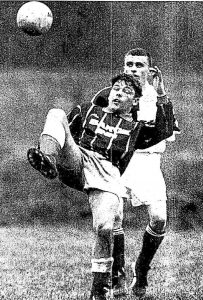 Suncroft had the experience in their side to not let their heads drop and they came out in the second half and dominated proceedings. They eventually got the equalising goal they deserved in the 72nd minute when a cross from captain Paul Hanley evaded everybody and Confrey was left unmarked at the back post to sweep the ball home.

Two minutes after that, Robertstown suffered another blow when goalscorer Carthy, who would later become a referee don’t forget, was shown a second yellow card and they were reduced to ten men.

Although Suncroft had an extra player they couldn’t really make it count and the closest they came to a winning goal was when Hanley’s late free kick was tipped over the bar by Owen McDonald.

Back then there was no extra time or penalties to decide finals on the day so the teams met back at Ryston six days later for a replay.

This time, despite their best efforts, Robertstown were no match for the wily ‘Croft side. Things may have been different had Joe Bowers scored early on but just as in the drawn game, although his shot beat the goalkeeper it was blocked on the line by a defender, this time Paul Hanley.

Hanley proved his prowess at the other end of the pitch in the 17th minute when Dennis Goff rolled a free kick into his path and he sent a superb shot over the Robertstown wall and into the net.

Hanley then made it 2-0 when he converted from the penalty spot after Davy Greville was adjudged to have handled inside the area, but Hanley was forced out of the game through injury before the half time break.

Johnny Burke put the game beyond Robertstown when he scored Suncroft’s third in the second half.

Robertstown got the consolation of a late goal when Bowers scored after being sent through by Thomas Bagnall but although they played their part in a two entertaining games it was Suncroft who claimed the honour of being the first winners of the competition.

Tommorrow, we’ll look back at the final from the 1995/96 season when Kildare Town took on Rangers FC.