THE growth of the Kildare League from the end of the 1994/95 season to the start of the 1995/96 season was nothing short of incredible.

From 25 teams playing in two divisions during the inaugural season the League grew to something which is much more recognisable today.

“To have achieved so much in such a short space of time is remarkable and astonishing,” said FAI President Louis Kilcoyne, when he attended the Kildare Nationalist annual awards night before the start of the League’s second season.

The second season kicked off with almost a 200% increase in membership. The number of teams rose from 25 to 71, the number of clubs from 19 to 37, and the number of players from just under 700 to almost 1,800. That meant the first season for the League’s Premier Division, followed by divisions 1-4 and a youths division.

The one competition that every single one of those adult players started out the season with a chance of winning was the League Cup. The 95/96 version was the first time that the competition was named after the sadly departed Kildare League secretary Tony Lumsden, someone who had worked tirelessly alongside the other founding members to get the Kildare League up and running.

The first final to be called the Lumsden Cup was played at Newbridge Town’s pitch on Monday 6 May 1996 between Premier Division sides Kildare Town and Rangers FC. 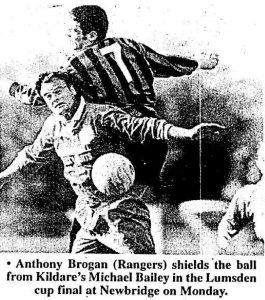 Jim Finn’s Kildare team were on the verge of winning the first Premier League title and while Newbridge side Rangers finished mid-table in the league they had proven themselves to be a very good cup side by reaching the first Premier Division Cup final only to lose the decider 3-0 to Coill Dubh the week before the Lumsden Cup final.

But Rangers were given a real fright in the semi-final when they needed extra time to get past Division 1 champions Monasterevan before a Mickey Martin goal secured a 3-2 win.

Kildare Town’s semi-final was more straight forward and goals from John Joe McGrath, Paddy Brennan and Johnny Clarke put them 3-0 up against Bracknagh before a late consolation for the losers.

Having lost a final the previous week the determination from Rangers was there for all to see in the early stages of the Lumsden Cup final and the match turned into a tightly contested affair.

Chances were at a premium and although Rangers goalkeeper Karl Ryan had to be alert on a couple of occasions to deny the lively Kildare forward pairing of McGrath and Brennan it was generally defences on top in the opening half.

Rangers’ best effort of the first half was when John Hughes forced Freddie Mitchell into a good save just after the half hour but their big moment came early in the second half. Mick Martin’s well timed run beat the Kildare Town offside trap but he couldn’t find the target with his shot from 18 yards.

The decisive moment in the game came with 20 minutes to go. Mick Bailey’s powerful run was brought to a halt when his shot was blocked by Rangers defender Patrick Hughes but the ball fell kindly to Brennan and the Kildare Town sharpshooter was not one who needed a second invitation when the ball was loose in around the penalty area and his well struck shot found the bottom corner of the net.

From there, Kildare saw out the game in a professional manner the closest that Rangers came to an equaliser was when Matt Melia saw his header pushed over the bar by Mitchell and soon after Kildare, with Malcom Coogan named as man of the match, were crowned champions. 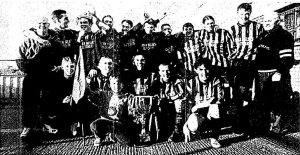 Kildare Town celebrate after their win over Rangers

It was tough luck on Rangers to lose a second cup final inside two weeks but things got even better for Kildare a week later when they completed the double without even kicking a ball. In the last game of the season Suncroft hosted Castle Villa knowing a win would clinch them the league title. They were up against a Villa side who need three points to help their chances of finishing runners-up but in the end a 1-1 suited only Kildare Town. This Premier League and Lumsden Cup double winning team was part of a golden era for Kildare Town and many of the players from this side would go on to etch their names in the Kildare soccer folklore.

Tomorrow we’ll look back on the 1996/97 final between Caragh Celtic and Castle Villa.