BY the time of the third season of the Kildare League rivalries were growing and any trophy won was hard earned. That was particularly the case for the trophy all Kildare players want, the Lumsden Cup, or the Naas Irish National Lumsden Cup as it was known in the 1996/97 season.

Kildare Town retained their league title but just behind them were the two sides who would eventually contest the Lumsden Cup final, Caragh Celtic and Castle Villa. Suncroft and Coill Dubh were also excellent sides at that time and there were some hugely competitive games between those teams.

Caragh Celtic had been promoted as undefeated Division 1 champions the previous season and had no problem in adapting to life in the top flight. As well as more than holding their own in the Premier Division, they had a wonderful run to the quarter-final of the FAI Junior Cup, including a memorable win over Midleton of Cork on the way, before losing narrowly to Avenue Utd of Clare in the last eight.

They also made the semi-finals of the Premier Division Cup but lost out on penalties to a Castle Villa side that would go on to meet in the Lumsden Cup decider.

To reach that Lumsden final they had to overcome a Milltown side who reached the semi-final after knocking out holders Kildare Town on penalties in the quarter-final. However, Division 1 side Milltown were no match on the day for Caragh and fell to their second semi-final defeat in the competition in three years. Ian Lawlor, Brian Nolan and Hugh Delmer scored the goals for Caragh in a comfortable 3-0 win.

It was more difficult for Villa in their last four game but an early strike from Tom Wynne was the only goal in their semi-final against Coill Dubh.

After just about edging out Caragh for the runners up spot in the league, Villa were perhaps slight favourites for the final but in reality there was nothing to choose between the teams and that was reflected on the day.

The teams took to the pitch in Newbridge Town on 11 May 1997 and the respective goalkeepers, Caragh’s George Halford and Villa’s Alan Proctor, were both called into action early on.

Villa suffered a real blow to their hopes when towering centre back John Gannon was forced out of the game through injury in the 23rd minute. 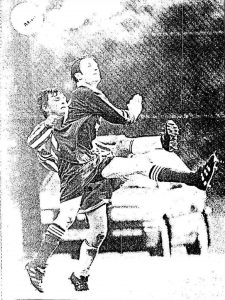 That unsettled Villa for a period and Proctor was soon called into action again when he bravely dived at the feet of Ian Nolan to prevent him from reaching Ciaran O’Toole’s cross.

There was nothing Proctor could do ten minutes before half time when Caragh scored what proved to be the only goal of the game. Brian Nolan’s lofted pass cleared the Villa defence and sent Ian Lawlor away and he was calmness personified as he tucked his shot past Proctor.

Caragh pushed on after that goal and were unlucky not to add to their goal tally on more than one occasion before the half time break.

That half time whistle came at the right time for Villa and they were able to settle down at the break, get reorganised and they were a different side in the second half.

Just before the hour mark, Malcolm Kirwan thought he had scored when his shot beat Halford but Tony Farrell was on the line to head away to safety.

Villa, who were managed by Jim Abbott and his assistant Tommy O’Connell, peppered the Caragh goal but found Halford in top form and he made a string of fine stops to keep the Castledermot side at bay – it was no surprise that the goalkeeper was later named as man of the match.

Villa’s last chance of the game came late on when Martin Farrell couldn’t quite get the required touch on Paddy Stynes’ cross to turn it into the net.

Caragh, managed by Michael Lynch, were able to hold on and the win meant deserved silverware to cap off a tremendous season for a team who were captained by Mick Larkin.

The result meant that Villa finished as League and League Cup runners up but they made sure they wouldn’t finish the season empty handed the following week when they won the first of three Premier Division Cups in a row after Paddy Stynes scored the only goal in the final against Kildare Town.

Tomorrow we’ll look back on an epic final encounter between local rivals Carbury and Coill Dubh at the end of the 1997/98 season.