IN Kildare soccer circles May 1998 was dominated by the local rivalry between Carbury and Coill Dubh as the Lumsden Cup and Premier League came to a thrilling climax.

Along with a Kildare Town side, who were chasing their third league title in a row, the west Kildare rivals had battled it out at the top of the Kildare league for the whole season and things were delicately poised as the season headed into the final stretch.

Mark Sullivan scored the only goal of the game as Carbury overcame Castle Villa in the Lumsden Cup semi-final while Coill Dubh needed extra time goals from Frank Dowling and Packie O’Brien to see off suprise packets Allenwood Celtic of Division 1.

That set up a mouthwatering battle between the two teams on 10 May 1998 at 4pm in Suncroft but just before kick off word filtered through that would have been a huge boost to Carbury.

At 2.15pm that afternoon Kildare Town hosted a Castle Villa side who, although had performed well in the cups, had really struggled in the league. After two and a half years unbeaten on their home ground, and less than a month after beating Usher Celtic in a famous Leinster Junior Cup final win, Kildare were heavily expected to get the win that would have put one hand and four fingers on a third league title in a row, even a draw would have left them in a strong position, but remarkably they lost 1-0.

That opened the door for Carbury to win their first Kildare league title, and for Coill Dubh to finish runners up, but before that there was a Lumsden Cup to decide.

There was a frantic start to the final and there were chances at both ends. Mark Sullivan shot just wide for Carbury while Seamus Daniels was a constant thorn in the side of Coill Dubh.

Remarkably, despite the amount of free flowing, attacking football from both teams the half ended without any goals. Carbury made the breakthrough nine minute into the second half when Tom Sullivan’s free kick picked out Mick Connolly and his shot beat Davy Anderson.

Coill Dubh almost struck back but Frank Dowling was denied by Mick Byrne and with 17 minutes to go they were reduced to 10 men when Leslie Kelly was sent off.

Shortly after, Carbury could have clinched the game but Kieran Brierty brilliantly cleared Seamus Daniels’ shot off the line.

They were made rue that miss when Coill Dubh equalised with eight minutes to go after O’Brien set up Dowling and after a 1-1 draw, for the last time in the competition’s history, the final went to a replay. 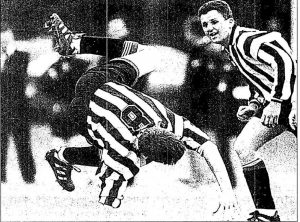 Just two days later on a Tuesday evening, thoughts turned back to the league. Kildare Town made no mistake in beating Monasterevan in their last game of the season but Carbury slipped up and could only manage a draw away to Caragh Celtic.

That left the league title riding on the last game, another derby between Coill Dubh and Carbury. Coill Dubh had home advantage and knew that a win would set up yet another game against Carbury in a play off for runners up and crown Kildare Town as champions. Carbury needed a win to secure the league and a draw to force a play off against Kildare.

Carbury raced out of the traps and goals from Mark Sullivan, JP Carey and Seamus Daniels remarkably put them 3-0 up before the half hour mark.

Things were never going to that straight forward against their biggest rivals and Coill Dubh pulled back goals through Leslie Kelly and Kieran Brierty. Carbury had to play the last half hour with ten men following the sending off of Mark Sullivan but they held on for a 3-2 win that was enough to secure their first league title.

They had plenty of time to celebrate before resuming their battle with Coill Dubh for the Lumsden Cup in the replay ten days later. Once more the two villages and soccer lovers from around Kildare descended on Suncroft for a game that lived up to its billing.

As in the drawn first game Carbury took the lead after Tom Sullivan picked out a team mate with a free kick, this time John Sullivan was the man on hand to head the ball into the net.

The lead didn’t last long and after creating the equaliser in the drawn game, Packie O’Brien was this time on the scoresheet for Coill Dubh when he delightfully chipped the ball over the head of Mick Byrne and into the net after 16 minutes.

The brilliantly pacy Leslie Kelly caused havoc for the remainder of the half but Coill Dubh couldn’t convert their dominance into goals. They ended the half with Gero Gannon bringing a save from Byrne after a 25 yard free kick.

Michael Ennis cleared off the line early in the second half but both teams had spells on top and both created enough chances to win the game but there were no more goals and extra time was needed.

Again, there were chances for both teams. Kelly shot narrowly over for Coill Dubh while Byrne produced a brilliant save to keep out a Paddy Moran header.

Extra time passed off without any goals and after 200 minutes of football a penalty shoot out was needed to separate these two closely matched sides.

After Tom Sullivan and Frank Dowling scored their team’s respective first kicks in the shoot, Seamus Daniels and Gero Gannon both missed the next penalties. John Sullivan missed Carbury’s third but Sean Casey held his nerve to put Coill Dubh in control. When Mick Byrne became the third Carbury player to miss Brendan Murphy was given the chance to be Coill Dubh’s hero and he made no mistake. Captain Frank Dowling lifted the trophy for Coill Dubh and his team mate Paddy Moran was named as man of the match.

Carbury would have been worthy winners of a Premier League and Lumsden Cup double but it was probably fitting that they shared the honours with Coill Dubh for all that both teams put into the season.

Tomorrow, we look back at the 1999 final when Kildare Town became the first side to win the Lumsden Cup for a second time when they beat Kingstown of Naas.

Round 2 of the Haven Hire Senior Hurling Championship