BY the 1998/99 season Kildare Town were firmly established as not only one of the best sides in the Kildare League but one of the teams in junior soccer in Leinster.

They had only been denied a third Kildare Premier League title in a row the previous season due to a late slip up in one game but winning the Leinster Junior Cup by beating Usher Celtic in the final after beating Tolka Rovers and Cherry Orchard along the way more than made up for that.

Once again in 98/99 they were right in the mix for league honours. The title hinged on a game at home to Coill Dubh in early May of that year but they were beaten 3-1 and had to settle for runners up in the league for the second successive season as Coill Dubh picked up their first Kildare Premier League title.

That game was played just a week before the Lumsden Cup Final and there was no doubt that Kildare headed into Kildare soccer’s biggest games as strong favourites against Division 1 side Kingstown, the first side to play in the League Cup decider from outside the top division since Robertstown in the first final.

However, it was no fluke that the Naas side found themselves in the final. They recorded one of the shock results of the season when they ended Coill Dubh’s reign as Lumsden Cup champions when Sean Ryan scored the only goal in the quarter-final.

Ryan then helped himself to a brace after Eoin Whelan had opened the scoring as Kingtown raced into a 3-0 lead against another Premier Division side, Monasterevan, in the semi-final. Brian Kaye did pull a second half goal back for Monasterevan but there was no doubt that Kingstown were worthy of their place in the final.

Kildare, who had won the cup in 95/96, had to beat the 96/97 champions Caragh Celtic in the semi-final and they did it the hard way after Declan O’Toole gave Caragh the lead. Peter Moore equalised for Kildare and then turned provider for Paddy Brennan’s late winning goal.

For the final, known as the Harrision Motors Lumsden Cup Final, on 9 May 1999, Kildare Town started with seven players who started the ‘97 final plus Robert O’Neill who was a substitute that day. 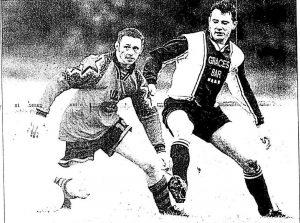 The weather conditions weren’t conducive to good football and Kingstown looked overawed in the early stages. Their more experienced opponents took control of the game early and Barry Hennessy and Peter Moore scored to put Kildare 2-0 ahead inside the opening 13 minutes. As an aside, Moore following in the path of Liam Carthy and Packie O’Brien of scoring in Lumsden Cup finals before going on to become a well known referee in the Kildare League  and he actually refereed one of the most famous Lumsden Cup finals – the 2008 game between Bridgewood Celtic and Liffey Celtic.

Kingstown’s first real attack didn’t arrive until the 23rd minute when Freddie Mitchell saved well to keep out Fergie Dunne’s shot. A minute later Moore almost scored his second of the game but he was denied by Kingstown stopper Andy Dooley.

It wasn’t all way one way traffic, and Kildare had their own chances to completely kill the game off, but Kingstown really did do their utmost to find a way back into the game. Ryan shot just past the post soon after the restart after outpacing Martin Scanlon and then with 21 minutes to go, Rory O’Connor almost latched onto a short back pass but Mitchell was off his line quickly to prevent him from reaching it. Kingstown went even closer to goal three minutes later when Ryan crashed a shot off the Kildare crossbar.

Kingstown got the reward their efforts deserved when Michael Power beat Mitchell from a brilliant 25 yard free kick.

That only served to wake up Kildare and they put the game beyond doubt in the 80th minute. Robbie Donnelly did well under pressure to clear the up the wing to Kevin Bradley. The Kildare substitute skipped past two defenders before beating Dooley with a brilliant shot.

The win meant that Kildare became the first team to win the competition for a second time and there was extra glee for captain Jason McAuley as he lifted the cup given how close they had come in the league title race just a week before.

Kingstown may have missed out on this final but playing against some of the best teams in the league on their way to the final clearly had a positive impact on them and they bounced back the following season to win the Division 1 cup. 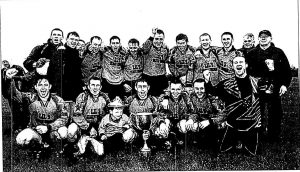 Tomorrow, we look back at the first final of the new century when Castle Villa played Monasterevan.