AFTER winning the Premier Cup and finishing runners up in the league and the Lumsden Cup in 1996/97, Castle Villa’s league form slumped in the following two seasons and they spent most of those seasons in the wrong half of the table. However, they were still a side feared by everybody showed they were capable of beating anybody on their by day winning three Premier Cups in a row, a feat not matched in the top flight cup competition since.

Villa’s league form changed for the better in the 1999/2000 and by the time of the Lumsden Cup final they were close to a first Kildare League title. Coill Dubh had completed their league programme and were on 44 points. Villa were in second place six points further back but had four games in hand and needed seven points from those games to claim the title.

Before that, they had a Lumsden Cup final to worry about and after losing three years previously to Caragh Celtic they were determined not to let their chance slip past.

However, they were up against an equally determined Monasterevan team who made it third lucky to reach the final. The had twice lost semi-finals twice in the previous four years but recorded a brilliant win on penalties over local rivals Kildare Town to finally make the final. They also almost put a serious dent in Villa’s title challenge just a few weeks previous when they dominated a 0-0 draw and would have taken full points only for a Alan Proctor penalty save to keep out Brian Kaye’s effort.

Villa edged past Suncroft in their last four tie to set up the final in Suncroft on Sunday 30 April and it turned out to be a cracking game.

The game came a hectic stage of the season for Villa as the games were mounting up and they looked heavy legged in the opening stages and fell behind after just three minutes when Kevin O’Connell crashed a shot into the Villa net off the inside the post.

That lead didn’t last long and eight minutes later a mazy Bryan Byrne dribble that started inside his own half ended when he was fouled inside the area by Tom Harrison. Villa captain Richard ‘Sid’ Hickey converted the spot kick. 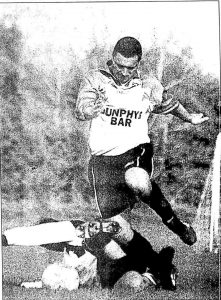 Hickey and Martin Farrell went close to putting Villa ahead as the half wore on but a minute into the second half they took their chance to go ahead. Even in the latter stages of his career, and by now playing at centre forward, Martin Farrell was a constant danger when quality ball was put into the box and when Malcolm Kirwan dug out a great ball from the right, Farrell was able to nod the ball into the bottom right hand corner of the net.

But Villa couldn’t hold that lead. Monasterevan won a free kick in the right hand corner and it was swung in by Fergus Heavey, Gavin Holligan got a flick on and O’Connell scrambled home his second goal of the game from close range.

Chances came and went at either end and both sides pushed with the game finely balanced and it took one of the all time great Lumsden Cup Final goals to decide the tie.

With five minutes remaining, Villa right back Phil Horan crossed from the ring wing and ball came towards Hickey just inside the ‘D’ outside the Monasterevan area. Without letting the ball bounce the Villa skipper smashed a shot that couldn’t have been any sweeter if it was covered in sugar into the Monasterevan net. The cliche about a goal being good to win a cup final is often trotted out at the wrong time but here was a goal good enough to a cup final, and it did win the cup final. 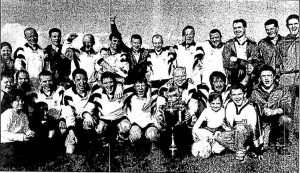 Footage of this final exists on YouTube and you can see all the goals, including Hickey’s stunning winner, here.

Villa went on to get the points needed to win the Premier League in their four remaining games including when a hat-trick from Martin Farrell, who was the Lumsden Cup final man of the match, gave Villa a 3-0 win over Monasterevan in a repeat of the final. Villa eventually matched Kildare Town’s feat in 95/96 of a top division and Lumsden Cup double fittingly enough when they beat Kildare 2-1 thanks to goals from Hickey and Kirwan. It’s feat that only only been done once since.

Tomorrow, we look back at the final from the 2000/01 season when underdogs Curragh Rovers went up against Suncroft.