REGULAR supporters of Kildare GAA in recent years will be well used to the sight of team physio Rob McCabe covering plenty of ground as he tends to stricken players but he is now preparing for his most ambitious run away from any crowds. 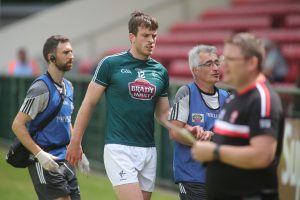 At 6am on Saturday 2 May, McCabe will set out on a 65km run to raise funds for the ALONE charity all while adhering to the HSE instructions of exercising within 2km of his own home in Kilmeague.

“About a kilometre down from our house brings you down to the Grand Canal so it’s a lovely little setting. Between two bridges it’s 650 metres so the plan is for an old school bollard at one end and bollard at the other and then lengths of that 100 times,” explains McCabe.

Not only is the run 15km further than he has ever ran at any one time but the fact that he is doing it on his own and away from any crowd will make it even more difficult.

“It’s the monotony of it. There’s the pain of running the 65km but then there is the monotony of it and also the mental isolation of doing it alone. Typically if you are doing a marathon, or even a local 5km or 10km, the crowds there or the other runners around you gives you a kick on.

“I’ve done up to 50km out in Donedea Forest in the National 50km championships. Again, that involved ten laps of a 5km loop in the forest so it will be a little similar to what I will be doing but that was running with fellow competitors and there was the support of a crowd. This is just going to be a completely different mental challenge to anything I’ve done before,” he said.

McCabe is looking to raise funds for ALONE, a charity that offers ‘practical support and coordinates services for and with older people to address challenges and to find solutions’. Any any time they offer a very valuable and badly needed service but even moreso in this time of elderly people cocooning away from society.

“The idea of the isolation of the run was number one, to comply with the HSE recommendations but also to almost replicate what the charity ALONE fund raises for, people who have go through that loneliness on a day to day basis.

“We’re all vulnerable and experiencing anxiety at the minute between jobs, unpaid bills, worrying about what is coming in the door next but it probably doesn’t compare to being alone and getting to that stage of your life when you are over 65 and on your own.

“Family wise we don’t have anybody in that category but of course there are people down around Ballyteague, Kilmeague, Allen, all around this area, in that situation. This crisis though has brought out the best in the community, even when people are out for their evening walk and maintaining their social distance there is almost that knowing nod as people pass just to say that we are there for each other,” said McCabe.

McCabe was appointed as the physio of the Kildare senior football team ahead of the 2018 season and that was the fulfilment of a goal he set out for himself when he opened his own clinic. He was full back for the Kildare U21s when they beat Dublin the Leinster final in 2004 and went on to make six appearances for the senior team and once he became a full-time physio it was always his goal to work his way back to the Kildare team.

“When I opened up my own clinic I wrote down a few things I wanted to do and the Kildare job was one near the top of the list and I got there eventually. I started with the hurlers for a couple of seasons and then James, who was there before me, put me in touch with Cian O’Neill and we had a chat and it started like that. It’s been great.

“I’d use the word playing loosely for my own career! I think I’ve been on the pitch more as a physio than a player. First and foremost I was a fan and then it was a real honour to play but, my highlights were probably at Under 21 when we won the Leinster in 2004, to get back in some sort of capacity was great and still is great,” he said. 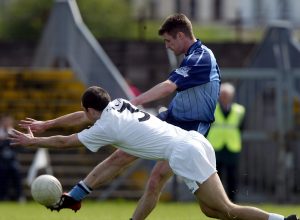 Rob McCabe makes a diving bloack during the 2004 U21 Leinster Final
Photo:INPHO/Andrew Paton

As well as being physio to the Kildare senior football team, McCabe runs his own clinic but like many he has had his work disrupted by the Covid-19 pandemic.

“I’m not working at all, I’m on daddy day care duty. My wife works full time in the HSE so she is still working but our clinic is closed at the moment and we can’t open. The Kildare lads are tipping away though and I’ve been keeping in touch with them and they are chomping at the bit and will be ready to go whenever we get the go ahead,” said McCabe.

If you wish to support Rob and donate to this very worthy cause you can do so here at his GoFundMe page.