2000/01 was a season that was held up at one stage for three weeks due to the Foot and Mouth disease. What we’d give to have just a three week delay now!

It was also a season that saw a lot of Kildare teams battling it out for important titles. Kildare Town beat Castle Villa in the semi-final of the Leinster Junior Cup to reach their second final in four years before losing the decider to Ballymun.

The league title was an exciting three-way battle between Kildare, Coill Dubh and Mill Celtic for most of the season but Mill faded away in the final weeks and Kildare and Coill Dubh finished the season level on points. The title was decided in a play-off between the two teams with Packie O’Neill scoring the only of the game to clinch Kildare’s third Premier League title in six years.

However, one of big stories in the Kildare League this season was Curragh Rovers. They won the Division 3 league and cup double before reaching the Lumsden Cup final and to this day remain the only side from outside the top three divisions to reach the final – and they came so close to the ultimate upset.

They had to get through one of the most exciting games of the season to reach the final, eventually beating Premier Division side Clane Utd in the semi-final on penalties after a 4-4 draw.

Meeting them in the final were local rivals Suncroft, who beat Mill Celtic 1-0 in their last four tie. It was a season that promised much for Mill but it unravelled slightly in the final weeks and they ended up the season third in the league, beaten Lumsden Cup semi-finalists – but they did get their hands on some silverware when they beat beat local rivals Castle Villa in the final of the Premier Cup.

Suncroft lined up for the final with only goalkeeper Paul Sinnott and Leo Foy remaining from them that won the competition’s first final five years previously and although huge favourites for the game they were given an almighty fright by the underdogs.

Despite the occasion, the game played at Newbridge Town on 20 May 2001, had a slow start.

There were few chances early on but gradually Suncroft began to get on top. Alan Middleton, Ray Coleman and Robbie Doyle all brought saves out of David Byrne.

Suncroft’s pressure eventually paid off and they took the lead four minutes before half time when Colm Slattery was able to lob the ball over of their Curragh ‘keeper and into the net.

Currragh responded well to this setback and Keith Powell and Paddy Maher came close to scoring before the half time break. They started the second half in similar fashion and they got the equaliser they deserved when Dougie Houlihan brilliantly finished from Tony McHugh’s cross.

McHugh then headed narrowly over as Suncroft began to wobble. 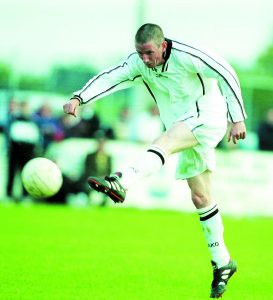 But Suncroft didn’t roll over and the game began to flow from end to end. Middleton failed to beat Curragh’s Byrne after being sent through on goal and then the ‘keeper produced a brilliant save to divert a Coleman shot over the crossbar.

The shock of the competition looked on the cards when Curragh took the lead with just 17 minutes remaining. Richard Reid, who in later years would manage Suncroft to Lumsden Cup final win and who was named man of the match in this game, crossed and substitute Jamie Timmins volleyed home.

Dwane Feane then clipped the top of the crossbar as Curragh came close to extending their lead but with just three minutes left, Suncroft levelled the scores.

Middleton did well on the left and his cross was headed into the net by Ray Aulsbury to send the game into extra time. 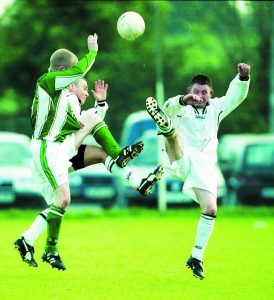 Unlike finals in the earlier years of the competition, replays weren’t used and instead there had to be a winner on the day so the game moved into extra time.

The extra 20 minutes failed to produce anymore goals so for the first time the final was decided on the first day by a penalty shoot out.

Having won on penalties in their semi-final perhaps Curragh felt they had the edge but after the first five penalties were scored, Marty Flynn missed their third kick.

After scoring the late equaliser in normal time, Aulsbury scored Suncroft’s fourth penalty and when McHugh’s effort was saved by Sinnott the game was up and Suncroft were champions.

It was a monumental effort from Curragh Rovers and their players still talk fondly of that season but they were just edged out on the day by the side with more experience of playing at the higher level. 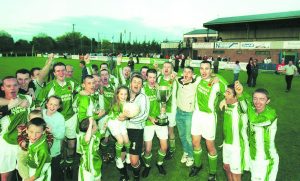 Tomorrow, we look back on a local derby between Mill Celtic and Caslte Villa.