NEW Jersey is home for now, a relatively safe place amid the dark clouds of COVID-19. James Roe Junior, like the majority of Irish citizens, will spend most of today indoors. But the fear of contracting coronavirus looms larger for him. New York City, a black spot for the deadly virus, has recorded more than 130,000 cases and almost 11,000 deaths. Armageddon is less than an hour away. 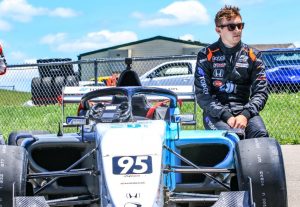 James Roe Junior had big plans for this year in the USA but for now he mainly focussing on staying safe
Photo: Red Case Photography

“You’ve got to be ultra careful of what you do,” says Roe. “I can’t go back to Ireland because of the international travel ban from Ireland to the USA that is in place. I fear I could get stuck back home. What can you do? You just gotta play your part. I am trying to play my part in following guidelines to stop the spread as fast as we can.”

Last month, his only concern was the start of the F3 Americas Championship. Midway through March, Roe fulfilled a hectic schedule for Topcon, one of his major sponsors, at a international construction trade show in Las Vegas. The following week, word came through that the championship’s opening round – set for 10 April in Atlanta, Georgia – had been postponed.

“Now our first round is going to be 5 June in Austin, Texas,” he details. “That’s best case scenario at the moment. All contracts, all payments, all deals are essentially frozen in the motorsport world. The world is kind of on pause until this passes. Our hope is that you can un-pause and everything goes back to normal once this passes.”

Despite this major setback, Roe remains upbeat: “I wouldn’t be one for getting too down and too negative. It is what it is. It’s the same for everyone. I actually believe there may be a lot of opportunities when things get back going or at least more deals to be had.”

Already the 21 year old has much to be pleased about. He finished fifth in his first season on the North American circuit last year, which included a win in front of 60,000 at Road America. His debut in F3 represented a rapid expansion after establishing solid credentials in Ireland and the UK. Roe started racing in 2014, winning on his home track multiple times, Mondello Park. Five years later, he was travelling from Naas to Chicago, his base for the 201 campaign. At every level, he has accumulated wins and lap records.

“Last September feels like three years ago,” he reflects. “It’s been a strange feeling. The day after my last race, I flew straight to Chicago. I met a guy about sponsorship for 2020. Since that day, I’ve been working every hour possible on it. Everything fell into place between Christmas and New Year. It was a bit of a kick in the nuts. It is what it is. I’m using it as a positive, to rest up and be further prepared and ready to go.”

Roe was on the fast track until the world went into stasis. All of his existing sponsors had signed on for the new season. CJJ Motorsports, spearheaded by Cork expat John Campion, doubled down on their investment in the Kildare driver.

“CJJ Motorsport has taken a big leap forward,” Roe reveals. “They have turned into a race team and are essentially running the programme. I’m a CJJ driver this season, which is really exciting. I can’t thank John enough for believing in me.”

Encouragingly, his backers have signalled their intention to honour all commitments. On the whole, Roe counts himself fortunate: “I’m blessed that I have outstanding sponsors. I had a worry initially when this all kicked off: ‘Are they going to come through?’ They all got in touch and we made plans to get through this.”

Such gestures carry exponential value in times of crisis. Restrictions on daily life have reduced day to day costs and, for once, budgetary constraints are not his biggest worry.

“It’s been a weird time to say the least,” he relates. “Our pre season programme was in place. We had our days planned out. We knew what races we were bringing people too. We brought in some new staff. I was ready, in good shape. Then bam, here we are.”

February faded into March through a haze of travel. By the time he reached the Las Vegas Convention Center, he had been on the road for three weeks. Amid concern about the creeping onset of coronavirus, organisers cancelled the final day of CONEXPO, North America’s largest construction trade show.

New York was Roe’s next stop: “I had to go into quarantine because I had been travelling. I didn’t know if I had the virus. I couldn’t risk meeting anyone having been around so many people for that long.”

“I’m doing a lot of work on an iPad,” he informs. “I have a software app that I can use to train my eyesight. I have a race simulator on the way too. I’ll start practicing my driving on that to stay sharp.”

Outdoors is now off limits. So, no more running in the suburbs. The monotony of indoor life is broken only when he takes the car for a spin. His closest human interaction comes at the drive thru whenever he fancies a coffee.

“I wouldn’t even get out of the car,” he stresses.

Roe will break for Indiana whenever normal service resumes,. He has an apartment 30 minutes from Indianapolis, the country’s motor racing capital.

“It’s like a jockey going to the Curragh or a footballer going to Barcelona,” he notes. “It’s the hub of it. There are two other young IndyCar drivers in my apartment block.”

While frustration abounds, motivation is not hard to find. The winner of this year’s championship is in line for a lucrative prize: “The champion of this series is going to get a million dollar scholarship to further his career in Indy Lights, which is the next step. Obviously, that added further fire to the belly. This year, I’m in it to win it.”

He signs off on this bullish note, an uncertain road ahead.