THE 2001/02 season threw up another local derby in the Lumsden Cup Final when Castle Villa met Mill Celtic.

The clashes between these two teams in the early part of the century are part of Kildare League folklore and they were was rarely much between them.

The previous season was the exception went Mill coasted to a 3-0 win in Premier Cup Final thanks to goals from Barry Mackey, Steve Carty and Noel Mackey but in four meetings in the space of two months at the end of the 01/02 season there was never more than a goal between the teams, and two cup finals were decided by penalty shoot outs.

Villa were right in the running for a second league title in three years when they met Mill in Mullarney Park in late March. Mill had been distracted from their league campaign by their success in the cups and had some wonderful wins around the country this season before very unluckily losing in Meath in the last 16 of the FAI Junior Cup. Nevertheless, the chance to halt Villa’s march to the title was all the motivation they needed and the league tie finished in a scoreless draw.

Through April, Villa kept up their title challenge while beating Suncroft in the Senior Cup semi-final and crushing surprise packets Bush Celtic 4-0 in Lumsden Cup semi-final, former Mill striker Steve Carty scoring a hat trick along with a Damien Smith goal in that win. Mill didn’t have the same kind of pressure on their league games but their earlier cup exploits in the season left them with a lot of games to catch up on but they still managed to beat Allenwood Celtic in Senior Cup semi-final and won 3-0 – Pauric Kinsella, Ronan Mackey and Barry Mackey with the goals, against BBC Utd in the Lumsden Cup semi-final.

So Villa headed into May with an unprecedented treble in their sights but two cups finals against their biggest rivals on consecutive sunny Sundays in Suncroft to contend with.

The Senior Cup final was first up and there were was no goals after 110 minutes and the game didn’t really open up even after both teams were reduced to ten men after Mill goalkeeper James Mackey and Villa’s Brendan Kelly were sent off in the first half. Once the game went to penalties, Mill’s stand in ‘keeper Kieran Doyle was no match for Villa and they won the shoot out 3-1 to claim the first leg of what they hoped would be a treble.

Seven days later, same venue, different cup, the two teams went at it again and once more there were no goals after 110 minutes of football. Until the 2019 final between Clonmullion and Monread this was the only final that finished scoreless after 90 minutes and to this day it’s the only final to go all the way through extra time without a goal.

The lack of goals in the games between the teams weren’t a reflection of the attacking talent on either side.

Villa had Steve ‘Gummy’ Carty up front with quality like Anto Lawlor, Bryan Byrne and Malcolm Kirwan around him. Carty’s brother David led the Mill attack with Noel and Ronan Mackey but Mill’s biggest threat was always Barry Mackey from midfield his battles against Villa’s Brendan Kelly and Richard ‘Sid’ Hickey were worth the price of admission alone.

But it was the strong and experienced defences led by Villa’s Martin Farrell and John Gannon and Mill’s Keith Bolger and Tom Mackey that came out on top.

So, another penalty shoot out was needed to decide the destination of the cup. It looked like it would Villa in the winner’s enclosure again in the shoot out when the scores were tied at 4-4 and just one kick left after Paddy Mackey had missed for Mill. Bryan Byrne had the chance to win the cup but heartbreakingly for him his effort struck the bar. Into sudden death, Mill goalkeeper James Mackey scored and then Gavin Weldon missed the crucial kick to crown the Josie Dunne managed side as champions. 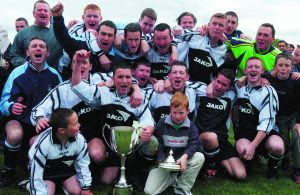 It really was tough luck for Byrne to miss the decisive kick because he was magnificent that season and within months was playing for a very good Kildare County side under Dermot Keely and went on to play a MLS game in America for New England Revolution, but not only did the miss cost Villa the cup, it also cost the them the treble – no team has closer to a top flight treble since.

It was fitting though that Mill got their hands on a major piece of silverware. They probably didn’t win as much as they should have during this season and the seasons before and after it. As we’ll see tomorrow, they were controversially denied retaining this trophy in the following season. It was a win especially deserved for Barry Mackey who was as good anything seen in the league during this year three year spell.

Villa dusted themselves down after the Lumsden Cup final defeat and set up the chance to win the league a few weeks later at the home of their rivals. After 310 minutes of football without a goal the sides finally found their scoring touch and Villa clinched the title with a thrilling 4-3 win.

Tomorrow, we look back at the 2002/03 final when Mill Celtic got their hands on the trophy again but their joy was shortlived after the controversial final that never was.