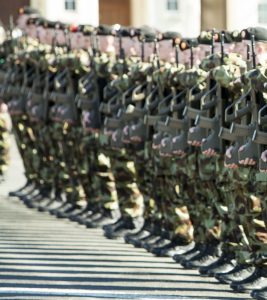 Kildare South Fine Gael TD, Martin Heydon, has praised the contribution of our Defence Forces in the response to Covid-19, and welcomed the news of significant numbers of former members returning to service.

“While we may not see them on the streets, we can be proud of the many roles the Defence Forces are carrying out as part of the national response to COVID-19.”

In response to a question from Deputy Heydon, the Minster with responsibility for Defence, Paul Kehoe, outlined the different ways in which Defence Force personnel are supporting the HSE including:

·                Naval Service Ships are providing additional capacity to the HSE for Covid19 testing facilities at Dublin, Cork and Galway;

·                Supporting the roll out of regional test centres through the provision of Defence Forces tentage and marshalling at some of the regional Covid19 testing facilities;

·                The Defence Forces Central Medical Unit have assisted the NAS through tele triage services and through DF ambulance/crew supports;

·                Defence Forces transportation assets and personnel have been utilised in the collection and distribution of vital PPE for the HSE.

“The Minister also confirmed to me that a total of 540 applications have been received from former enlisted members to re-join the Defence Forces as part of the response to Covid-19,” said Deputy Heydon.

“Individuals wishing to apply are required to meet a range of eligibility criteria such as medical and physical fitness, and will be required to be within the age requirements for the rank for the duration of their enlistment.

“The scheme will allow for initial re-enlistment for a minimum of six months and up to 3 years. It is designed for medium to long-term requirements and it will remain in place after the COVID 19 response is complete.

“While every effort is being made to return our troops who are due home from peace keeping duties, the moratorium on upcoming rotations and leave makes that difficult.  The moratorium is designed to ensure the continued operations of essential peacekeeping missions, to protect vulnerable populations in conflict zones and to maintain international peace and security.

“It is also designed to ensure the health and wellbeing of personnel deployed on UN operations by limiting movement of personnel into mission areas. While some troop rotations have been completed, work is ongoing to complete the outstanding UNIFIL rotations.  The Defence Forces and the Departments of Defence and Foreign Affairs and Trade are actively working to get the rotation to happen and a request for an exemption to the moratorium has been made but the final decision rests with the UN.

“I have been reassured that when definitive information on rotation dates is available, personnel and their families will be advised by the military authorities. In the meantime, troops continue to be paid their overseas peace support allowance for the extended period of their stay.”