LUMSDEN CUP REVISITED – The final that never was

THE 2002/03 Lumsden Cup is the most controversial in the competition’s history – officially the final never happened.

Mill Celtic and Coill Dubh did take to the pitch at Station Road on 11 May 2003, and they played out a cracking encounter that went all the way to penalties, but within a matter of days of Mill leaving Newbridge with the cup the trophy was back at the league offices.

A few days before the final, Mill were informed that one of their players was suspended for the final due to the accumulation of yellow cards, something they vehemently disagreed with. So Mill played what was technically an ineligible player in the final and that led to the final being declared null and void.

Although their penalty shoot out win has been stricken from the record books, Mill feel they won the game on the field of play and celebrated their win as much as they had 12 months previously when they beat Castle Villa.

Retaining the Lumsden Cup is not an easy thing to do. This would have been the first time a team came back 12 months later and won the final again and it’s only been done twice in all the years since. 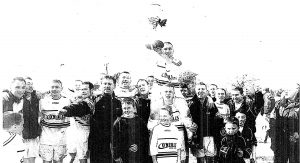 In the league, Coill Dubh and Mill had a real tussle at the top of the Senior Division throughout the season but a week before the Lumsden Cup final Coill Dubh made sure of their second league title in five years, after three years in a row in second place, with a 2-0 win over Straffan.

The week after the Lumsden Cup final, Coill Dubh matched Castle Villa’s achievement of the previous year of adding the Senior Cup to the Senior Division title when Antoin Carew’s late goal clinched a 3-2 win over Coill Dubh.

In the Lumsden Cup, Coill Dubh booked their place in the final after a Trevor Bowers hat-trick, as well as goals from Damien Leeson and Frank Dowling, helped them to a 5-1 win over Allenwood Celtic in the semi-final. Mill had a tough battle but Thomas Harney came up with the only goal of the game against Carbury.

Mill started with 10 of the team that started the previous year’s final and they took the lead after 18 minutes when Barry Mackey curled home a brilliant free kick.

Bowers then gave Coill Dubh the lead just before the hour mark when he converted from close range after Mackey had kept out Damien Leeson’s initial free kick.

Coill Dubh went down to ten men when Joey Behan was shown a second yellow card and Mill used their extra player to force an equaliser with 16 minutes left when Mick Barrett toe poked home after a goalmouth scramble.

Despite their numerical disadvantage, Coill Dubh thought they won the game late on after Bowers had the ball in the net for a third time but he was denied a hat trick and a winning goal by the offside flag.

Extra time produced no goals so for the second year in a row Mill were into a penalty shoot out to decide the Lumsden Cup. Goalkeeper James Mackey scored Mill’s last penalty in the shoot out against Castle Villa 12 months previously and stepped up to score his team’s first kick here, and then kept out Coill Dubh’s first when he saved Mark Heffernan’s kick.

Steve Carty scored Mill’s second, 12 months after he scored against them for Villa, and when Leeson missed his kick Mill were in control.

Ronan Mackey and Leslie Kelly then scored before man of the match Barry Mackey missed for Mill. Bowers converted to give Coill Dubh hope but Chris Keogh held his nerve to score, just as he had against Villa the year before, to give Mill the win.

Captain Noel Mackey lifted the trophy for the second year in a row but the cup wasn’t Mill’s cup for long.

Tomorrow, we look back at one of the all time great Lumsden Cup final upsets when Crystal Celtic took on Castle Villa in 2004.