THE Lumsden Cup final of the 2004/05 season threw up something in the pairing of Kilcullen and Ballycane Celtic that we didn’t see again until the 2019 final – two teams in their first final going up against each other.

Kilcullen were looking for their first major piece of silverware in the Kildare League since winning the top division in the very first season of the League. They had endured a bit of an up and down period after that, often not quite good enough to be in the top flight but too good for the division below. Jim Finn arrived as manager from Kildare Town and stabilised the club and they caused upsets by beating Coill Dubh and Mill Celtic on the way to reaching the 2004 Senior Cup final before losing to Carbury.

By the 2004/05 season they were managed by Freddie Mitchell, the former Kildare Town goalkeeper who won the competition twice as a player, and although they didn’t pull up any trees in the league that season they won through to the Lumsden Cup final after Ciaran Barker scored the only goal of the semi-final against BBC Utd.

Their opponents in the final would be Division 1 side Ballycane Celtic, in only their third season in the Kildare League, who caused a major upset in the semi-final by beating Carbury and who had also beaten Kildare Town on their way to the decider.

The final kicked off at 7pm on Sunday 8 May in Station Road and turned out to be a classic in front of a large crowd.

The game started at a fierce pace and both teams had their chances but it was Kilcullen who took a firm grip of the game with two goals in quick succession just after 20 minutes. Tadhg Shanahan opened the scoring after being sent through by Robbie Donnelly and Brian Bell doubled that lead shortly after with a remarkable goal when he lobbed the ball over the head of Marcus Burke from 45 yards. 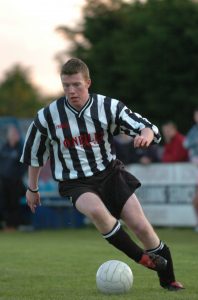 Kilcullen then almost went 3-0 up when both Kieran Brennan and Michael Kelly had shots cleared off the line during a goalmouth scramble after Ballycane had failed to deal with a Trevor Harris corner.

But Ballycane were back in the game nine minutes before half time when a neat 1-2 between Keelan Noone and Vernon Nolan sent Nolan away and he curled a delightful shot past Kevin Talbot.

That was the last of the scoring in the first half but the game was held up for over half an hour early in the second half due to an injury to John Dowson and the Ballycane striker had to leave the ground in an ambulance.

Kilcullen were quicker to settle back into their stride once the game got going again and when centre half Brennan had another chance following a Harris corner this time he made no mistake and the Senior Division side moved into a 3-1 lead.

Andrew Sheridan pulled a goal back for Ballycane with eight minutes left but despite their late pressure they couldn’t force an equalising goal with Ray Aulsbury, a winner in 2001 with Sunrcoft, marshalling a strong defensive performance for Kilcullen alongside Brennan and in front of Talbot in goal. Kilcullen captain Michael Kelly, also named man of the match for his display in midfield, lifted the cup in front of the Newbridge stand. 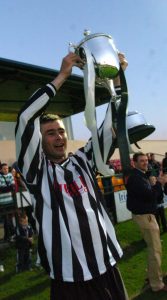 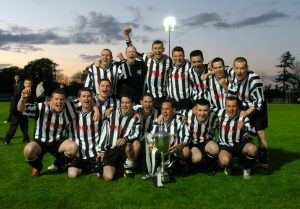 Tomorrow, we look back on another up and coming club as Liffey Celtic take on Carbury in the 2005/06 final.