BY the time of the 2006/07 season, Coill Dubh, Castle Villa and the emerging Liffey Celtic had nailed down their places as the top teams in Kildare and Kildare Town had been left behind a little.

The club’s team of the late 90s and early part of this century had set a high bar but they hadn’t managed to land a major title since their league win in 2001.

Although Jason McAuley and Robert O’Neill remained from that successful era but by 2007 it was pretty much a different team and under the management of Seamus Sage. Another who was part of that winning team was David Dempsey, he was just a youngster breaking on to the senior team in the late 90s but by 2007 he was club captain and he played a huge part in getting the team through their Lumsden Cup semi-final against Connell Rovers.

He had a super game in midfield and set up the only goal of the game for Peter O’Neill as Rovers fell to their second semi-final defeat in successive seasons.

It took only one goal to decide the other semi-final too as Monasterevin just edged past Mill Celtic to return to their first final since 2000 thanks to a Gareth O’Reilly header.

That set up a local derby on Sunday 18 May in Station Road, and it was a game that Kildare quickly took control of.

With just nine minutes gone, Kildare took the lead when Brian Moylan was on hand to convert after Francis Foran’s cross caused all sorts of problems for the Monasterevin defence.

Monasterevin fought back well but Padraig Casey was denied by a superb Brian McGannon tackle and O’Reilly failed to hit the target from a good position. 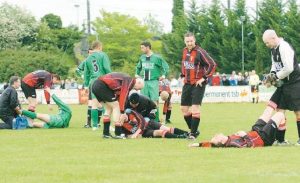 Players from both teams receive treatment during the final

After failing to take those chances, Monasterevin handed Kildare a second goal when Dempsey’s shot just before half time somehow evaded the grasp of the goalkeeper Trevor Holligan and ended up in the net.

Monasterevin introduced Colin McCabe at half time and he did cause problems but Kildare’s defence was very well organised and their right back, Brian McGannon, was eventually named man of the match. Behind them, goalkeeper Kevin Talbot kept a clean sheet on his way to a second winners medal in three years after being part of the Kilcullen team in 2005. 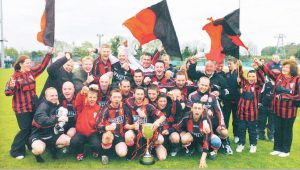 Afterwards captain Dempsey said, “It was a really tough game. Monasterevin totally owned the second half but the lads at the back were great but we won the game in the first half. There were a lot of nerves in the dressing room before the game so it was great for us to get the early goal, it helped settle us down. As captain, I’m just really proud, I’ve won a fair few things but this feels really special.” 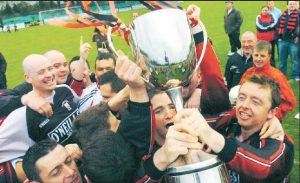 It was special for McAuley and O’Neill too as they had played in the ‘96 and ‘99 finals too and they became the the first players to win three Lumsden Cup medals with the same club.

Tomorrow, we look back at one of the competition’s most famous finals when Bridgewood Celtic took on Liffey Celtic in 2008.