FLASHBACK – FOGARTY COMES OFF THE BENCH TO FIRE KILDARE TO VICTORY

IT doesn’t happen too often but on this day in 2012 the captain of a Kildare senior football team climbed the steps in Croke Park to lift a piece of national silverware.

There’s no doubt the Kieran McGeeney deserved to win more illustrious trophies than a Division 2 league title but it took a hard working performance, and a well timed cameo from a young sub, to get over the line against Tyrone. 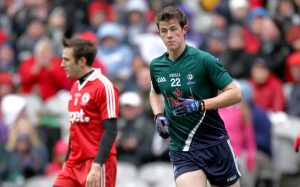 On this day in 2012, Padraig Fogarty came off the subs bench and kicked three points to help Kildare beat Tyrone in the Division 2 final
Photo: ©INPHO/James Crombie

McGeeney’s team lost a Leinster final in 2009, an All-Ireland semi-final in 2010 and exited the Leinster and All-Ireland championships after one point defeats in 2011 but they finally got their hands on a trophy thanks to three superb late points from St Laurences man Padraig Fogarty.

It had been a typically tight affair against Tyrone and the match was very much up for grabs with ten minutes remaining and the scores tied at 0-10 each.

Then Fogarty took over.

He kicked the first of his trio of points with a brilliant effort in the 61st minute and Eamonn Callaghan followed suit a minute later.

By now, Fogarty was leading the Tyrone defence a merry dance and Eoghan O’Flaherty scored Kildare’s sixth point in a row after the big full forward had been fouled.

A late Tyrone point left the final scoreline at 0-16 to 0-11 and Johnny Doyle climbed the steps to raise up the cup. 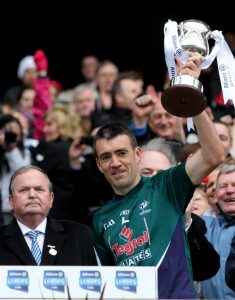 It was Kildare’s first national title at senior level since 1928. Let’s hope we aren’t waiting as long for the next one!