THE Lumsden Cup final of the 2007/08 season remains one of the most iconic finals in the competition’s history.

Liffey Celtic would, unfortunately for them, be on the end of similar results in finals of the future but none against a side as lowly ranked as Bridgewood Celtic. 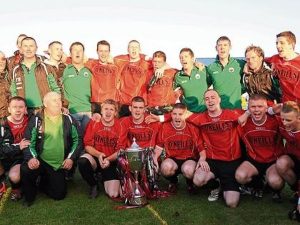 For the Robertstown side to even reach the final was an achievement of epic proportions. They were battling for third place in Division 1 and going up against a Liffey Celtic side were gunning for the Senior Division title there should have been only one winner.

They had players like Lesley Kelly and Frank Dowling, who had been part of the hugely successful Coill Dubh’s teams of the recent past, but Liffey weren’t short of stars names of their own.

Even now, 12 years on, it’s hard to believe how this game played out.

Bridgewood, managed by Tom Swords, showed no fear in the early stages but once Steven Sheridan put Liffey ahead in the 11th minute the Newbridge men settled into their rhythm and dominated the remainder of the half.

John Drohan had been in incredible scoring form that season, hitting over 40 goals, and he went close to Liffey’s second shortly after.

The lethal striker turned provider in the 22nd minute when his cross forced a mix up between goalkeeper Ray Kelly and Henry Reidy and Sheridan was left with a simple tap in for his second goal.

Joe Carthy went closed for Bridgewood late in the half when he headed into the side netting but Liffey were full value for their half time lead.

Things started to go wrong for them when defender Colin Osborne was shown a second yellow card 11 minutes into the second half.

But the loss of Osborne didn’t stop Liffey going forward and two minutes after going down to ten men, David O’Riordan scored their third after another clever pass from Drohan.

3-0 down, that should have been the end of the road for Bridgewood but with 23 minutes to go they found a way back into the game when Joe Kavanagh’s lofted free kick into the area from the halfway line was allowed bounce in the area, the ball deceived ‘keeper Chris Carney, skipped up and hit the crossbar and Shane Ward headed the rebound home from two yards out.

Suddenly it was game on and any composure in the Liffey team wilted. Bridgewood got their second in the 71st minute when Liffey defender Tom McLoughlin diverted Shane Harris’ cross into his own net despite being under no real pressure.

It was all Bridgewood now and Lesley Kelly went close to an equaliser when his 76th minute shot clipped the top of the bar.

But that reprieve was only temporary for Liffey and in the 83rd minute the former Coill Dubh team-mates combined when the veteran Dowling crossed for Kelly to head home and send the sizeable Bridgewood support into delirium.

All their hard work was almost undone in the last minute though when JP McDonagh brilliantly made his way to the byline and cut the ball back to O’Riordan and his shot was only narrowly past the post.

Heading into the final minute of extra time there had been no further goals and everybody’s thoughts were starting to turn towards a penalty shoot out but Bridgewood had one last chance when they were awarded a free kick in the final minute 25 yards out and a little to the right of the goal.

It still needed something special to score from there and Lesley Kelly stepped up to provide it. He curled the most incredible shot over the head of Carney into the net to give what up to then was the most dramatic ending to a Lumsden Cup final.

A sensational comeback, a sensational winner, it’s only those of a Liffey Celtic persuasion who were in Station Road that night and don’t fondly remember it.

That was the last Lumsden Cup final before the KDFL switched to summer soccer and tomorrow we look back at the 2009 when Liffey Celtic were in the final again to take on Castle Villa.