SOME players are just born lucky.

Never underestimate the talent required to make it to senior inter-county level but you need a huge dollop of luck along the way to take the ultimate honours. 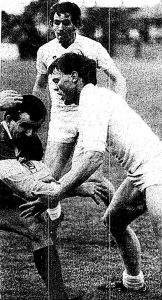 Take Dermot Earley. Not only does he have the genes, he hits maturity almost at the very moment the Kildare footballers turn a corner in 1997. A year later he’s a goalscorer in an All-Ireland Final and an All Star. Within his first four championship campaigns he wins two Leinster titles. Serendipity.

Not so Paddy O’Donoghue or the many fine Kildare footballers who soldiered through the seventies and eighties, arguably the most miserable of periods for the Kildare team. John Crofton, a year older, is another whose body clock denied him the crowning glory of a long and noble county career.

For those of us growing up in the eighties, O’Donoghue and Crofton were the rocks upon which Kildare teams were formed and despite all sorts of sporting tragedies occurring around them on the pitch, those two held the middle of the defence and provided a platform upon which more successful outcomes should have been built.

The O’Donoghue clan were instrumental in the rise of Johnstownbridge from the depths of junior football. Eamon, Paddy, Barry and Joe all played senior for the county team and amassed 281 league and championship matches between them, with Paddy earning 135 of those, 131 as a starter.

The red-haired Paddy made the Kildare minor team as a 17-year old in 1975, when he first lined up alongside Crofton. It was a strong outfit with the likes of Frank Mulligan (Clane), Pat Kenny (Carbury), Tommy Shaw (Sarsfields) and Paul O’Flaherty (Athy) on board.

O’Donoghue slotted in at full-back as Kildare won their second ever Leinster title, beating Meath in the final and marking a certain Colm O’Rourke.

Unfortunately, Tyrone blitzed them in the All-Ireland semi-final with O’Donoghue starting at corner back but moving into full-back when Mulligan switched to midfield to shore up problems out there.

A year later Paddy was winning his second Leinster title, this time at under-21. Still only 18, O’Donoghue was in his usual full-back berth as Dublin were surprised in the Leinster final.

A young Kildare team were beaten convincingly by a Kerry side of all the talents. You only have to look at the names: O’Shea, Walsh, Spillane (two of them), Nelligan and Moran. Paddy, though, despite his relative youth, was singled out as one of the stars of the Kildare team and was even switched to centre-forward to get the forward line moving.

Brother Eamon was managing the county senior team at this time and a month later Paddy was selected in the by now familiar number 3 shirt for his debut against Galway in the League. He had now played minor, under-21 and senior in the same year, a feat few have managed (Ollie Crinnigan and Larry Tompkins are two others that spring to mind).

Starting berths on Sigerson Cup wins were to follow in 1978 (at midfield) and 1979 (full-back) with UCD and Paddy must have thought this football lark was easy in those days.

O’Donoghue took to senior football like a duck to water and mature performances against Meath, Dublin and Kerry before the end of 1976 cemented his place at full-back.

Rarely did a Kildare team line up without him in that position for the next fourteen years, although he unfortunately missed out on the run to the Leinster Final of 1978 with a broken ankle and only came on as a sub in that defeat to Dublin.

He wouldn’t have known it at the time but that was to be his only appearance in a Leinster final. By the time 1992 came around, Paddy’s career was winding down (as it turned out he played his final game a few months before as a sub in a league play off against Meath).

O’Donoghue’s biggest attribute, apart from his physical solidity, was his fielding, and the abiding memory is of him reaching over an opposing full-forward to fetch the ball from the skies. Even if he couldn’t make a clean catch, he had a great ability to get a fist to the ball and knock it away to safety. Crofton and Davy Dalton had similar attributes as Kildare full backs.

Paddy was selected to travel on the All Stars tour to the United States in 1983 and that same year saw the O’Donoghues prove instrumental in bringing Johnstownbridge their first Kildare Senior title. They’d won their first under-21 title in 1976 with Paddy on board and moved into senior ranks with an Intermediate title win against St. Kevin’s in 1978.

Five years later, the O’Donoghue brothers were lining up in the senior decider against Sarsfields. Paddy was named at full-back but a pre-match switch with brother Eamon brought him to midfield alongside teenage brother Joe and a storming second-half performance was instrumental in seeing the Bridge shock the firmest of favourites by 2-7 to 1-8. The fourth brother Barry scored a pivotal goal.

On the county scene Kildare toiled through the eighties, only making provincial semi-finals on four occasions and never going further. The loss of Tompkins and Fahy was a huge blow, of course.

By the time Micko arrived, Paddy was 32. Bizarrely he’d been playing at centre-forward under Pat Fitzgerald but Micko picked him at full-back for his opening game against Leitrim in the autumn of 1990. He remained there until the League semi-final against Donegal when he moved to centre-back.

Finally, he found himself back on the big stage with Kildare, 13 years after his only Leinster Final, when he played no. 6 on the team that met the Dubs in the League Final of 1991. He was one of Kildare’s strongest performers as lady luck evaded them on the day.

Arguably one of Micko’s biggest mistakes with Kildare was keeping Paddy at 6 for the Leinster opener against Louth in Drogheda. His old buddy Crofton had been at full-back for the league final but was injured for Louth and O’Dwyer moved Seán Ryan to the edge of the square. While Paddy was one of the better Kildare performers, many felt he would have shored up the area in front of goal better on that fateful afternoon.

While he soldiered on through the following league campaign, that was to be his last championship match as another injury, hamstring this time, denied him a place even on the bench in the Leinster Final of 1992 against Dublin, leaving Crofton the sole survivor from ’78.

On the club scene, teacher O’Donoghue was front and centre of Bridge’s most successful decade. They reached three more senior finals from 1987 to 1989, winning the latter two against Carbury (in a replay) and Clane after losing the first to Athy.

O’Donoghue was key to both of those wins. He scored a rare goal in the 1988 final and he and brother Joe held sway against a young Martin Lynch and Willie McCreery at midfield the following year.

Paddy still had two more finals in him (’94 and ’96), when Sarsfields and Round Towers got the upper hand. He was 38 by the time of his sixth and final decider.

At county level, Paddy sits sixth on the appearance charts from the last 60 years, just one game behind Crofton (136). Glenn Ryan (140), Anthony Rainbow and Eamonn Callaghan (both 159) and Johnny Doyle (161) are the only others to play more than him in that period.

A legendary figure for both club and county.