SAY IT AIN’T SCEAUX: RUBY WALSH SAYS SOME OF UN DE SCEAUX’S MOST MEMORABLE MOMENTS CAME OFF THE BACK OF DEFEATS

“We said our goodbye to Un De Sceaux on Monday as, after seven super seasons in Closutton, he went back to his native France to enjoy his retirement. But what you can say about him? He looked invincible for so long.

“Bar a fall, he was unbeaten until he ran into Sprinter Sacre. Twice. When you look at it in the echelons of history, finishing second to Sprinter Sacre, there was no shame in that. Yet, after that he could go back and win a Prix la Barka over hurdles. Some of his biggest days came off the back of defeats.”

The following is a glimpse at those that stood out most for the 12-time champion jockey and Paddy Power Ambassador.

“I’d dislocated my shoulder on Abbyssial in the Triumph Hurdle at Cheltenham and I came back to ride this lad in Auteuil. It was my first ride back. It was the Saturday before the Punchestown festival. It’s a day not many remember but I do. We were in Paris and it was pissing rain. I mean pissing rain. It never stopped raining. I don’t remember a wetter day at the races.

The race was just short of 2m4f and you’re coming back from injury wondering how your body will be and you take on the challenge of Un De Sceaux. He went up in trip but byjesus, was he good that day. It was in the rain, I was being pulled and dragged. He ran away with me every step of the way. They joined him going to the second last, he quickened up, went three or four clear – he ran out of juice going to the line but he still managed to hang on. I remember thinking that day that when this horse does settle some little bit, he’ll definitely be as good a horse over 2m4f. You can be sure that set me up for Punchestown the following week.”

“He had beaten Sire De Grugy in Ascot the previous January. Sire De Grugy went into this race with two runs under his belt though, including a win at Ascot. It was Un De Sceaux’s first run of the season. It was a Grade 1 in December. Ar Mad, Gary Moore’s horse, went a ferocious gallop which suited Un De Sceaux and towed him into it. When Ar Mad had cried enough at the railway fences, Un De Sceaux took it off him. He was brilliant everywhere bar the last where he got in under it and then Sire De Grugy headed him. He had to rally and battled back. From being a horse that people thought once you got to him, you’d beat him to then becoming a horse that could actually battle back and win, he proved he wasn’t the front runner that everyone thought he was. It was a great day for the owners as he’d been to Sandown before and hadn’t collected. That was the day he showed everything.”

“To me, this was one of his best ever performances. The trip of 2m5f was stretching him. I settled him in early but then he started to tank with me up passed the stands. By the time he faced into the back straight, he just attacked the fences one after the other and ultimately, it was jumping that won it for him that day. Even his jump at the second last and then his jump at the last, the commitment that he put into those two last jumps was incredible. I asked him a big question and he delivered.” 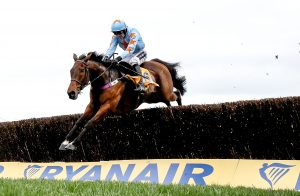 “He’d got beaten by Balko Des Flos in the Ryanair that year and then he went to Fairyhouse, where he sort of looked vulnerable but ended up winning a conditions chase. He then steps up to take on Douvan and Min in the Punchestown Champion Chase. You’re thinking, ‘Jesus, can he?’ Patrick rode him and he jumps out and makes every post a winning post. He beats Douvan. Min was fourth that day. He was the outsider of Willie’s three. It was a cracking race. The longer his career went on, the more you were thinking, ‘ah, he can’t be the horse he was’. He just kept serving it up to them and he sure did that day. It was the manner in which he did it that day. It was just him and Douvan and there was no rest.” 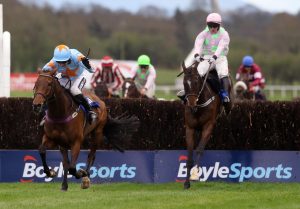 Patrick Mullins on Un De Sceaux lands in front of Douvan on the way to winning the 2018 Punchestown Champion Chase
Photo: ©INPHO/Lorraine O’Sullivan

“He took on Min again this day and Min was going there on the back of that brilliant performance in Liverpool. Min was dropping back in trip and I was on Min. It was the first time I rode against Un De Sceaux and the two of them went toe-to-toe. In particular, it was what they did in the first mile of the race. This was two horses who gave it their all but it was Un De Sceaux’s jumping which was the difference. That was his strongest point and he outjumped Min every step of the way. It was a case of jump and go that day and the best man won. Every step of the way, Un De Sceaux was going too easy for me. There was no outsmarting anybody when it came to Un De Sceaux. He just always did his thing.”

Ruby Walsh is the Paddy Power Racing Ambassador and is a columnist with Paddy Power News (news.paddypower.com). 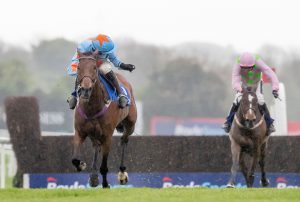