2009 was the first season of summer soccer in the KDFL but despite the change in fixture format it was a familiar face on top of the Senior Division by the end of the season.

Coill Dubh finished comfortably ahead of Liffey Celtic to lift their sixth league title in 12 years and complete a remarkably consistent run of finishing in the top two in 11 of those 12 seasons. For good measure, they added the top flight divisional cup to their league title for a third double by beating Suncroft.

But they were nowhere to be seen in the last four of the NA Meats Lumsden Cup. Liffey Celtic and Castle Villa both needed extra time to reach the final with John Drohan and Anto Lawlor scoring their respective teams winning goals against Rathangan and Suncroft.

The change in calendar meant a new time of year for the final and the first October final took place in Station Road on Sunday 25 October at 6pm.

After being on the end of a 4-3 result after a stunning comeback in the previous season, Liffey were determined to take their opportunity and the game turned into another classic encounter.

Three times in normal time Liffey went in front but on each occasion a dogged Castle Villa side fought back and equalised and in the end it was another 4-3 result against the Newbridge side.

That lead only lasted two minutes before Colm Holden broke the Liffey offside trap and planted his shot past Kevin McDonnell.

That was the score at the half time break but Liffey took the lead once again three minutes after the break when Drohan converted from another Collins cross. 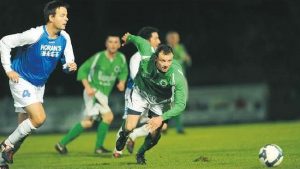 Once again, that lead was shortlived and in the 56th minute Villa levelled for the second time when Timmy Doyle scored his first of the game.

By now, the game was flowing from one end to the other and both teams looked capable of scoring at any time but it was Liffey who got their noses in front once more. 39 year old Villa centre half Mark Malone was adjudged to have fouled Michael Treacy and Robbie Cullen confidently slotted home. After Cullen’s team Steven Sheridan became the first man to score two in two Lumsden Cup finals the season before, Cullen became the second player to do so.

It was far from the end of the drama and Villa won a penalty of their own when Liffey’s Malone fouled Holden inside the area. Malcolm Kirwan was later named man of the match and like Cullen before him, made no mistake from 12 yards.

That was the end of the goals so the game so the final again went to extra time. It took just a minute of the extra time period for the decisive goal to arrive, Kirwan again doing well before setting up Doyle to score.

Robbie Cullen came closest to an equalising goal for Liffey in the remaining time but for the second season they lost a final on a 4-3 scoreline after extra time. 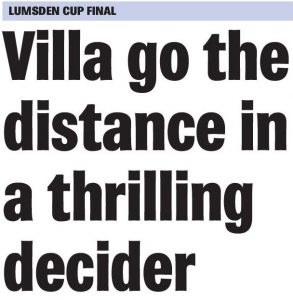 Villa were lifting the trophy for the second time and their manager Liam Murphy was delighted.

“We worked very hard to get here, Liffey are as good as any side in the league and we are just delighted to come out on top. We did it the hard way, we had to come from behind three times but we just felt that if we could get in front that they wouldn’t come back.

“That’s what we have said to them all year. If they go a goal behind, it doesn’t matter, we just need to keep playing our game. We had problems earlier in the year with numbers but we got that sorted and this is our reward.”

He picked out some of his experience players and matchwinner Doyle for praise.

“Malcolm (Kirwan) was unbelievable tonight. So was Joe Murphy at the centre of defence, Mark Malone beside him in defence is 39, they could be all gone next year but that’s for another day.”

“Timmy was another who played very well, he is training in the army now and the extra fitness shows.” 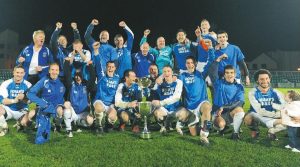 Tomorrow, we look back at the 2010 final when Clane Utd went up against the mighty Coill Dubh.