IN 2010 Liffey Celtic brushed off their disappointment at losing the two previous Lumsden Cup finals to win their second Senior Division title but after finishing outside the top two in league for only the second time in 13 seasons, it was Coill Dubh who finally got their hands on the League’s most coveted trophy. 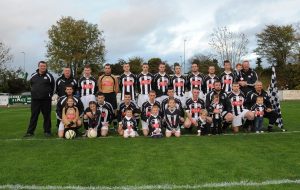 It was something of an anomaly that despite their success in the league and also the divisional cup, Coill Dubh hadn’t won a Lumsden Cup since 1998 and had only reached one final during that period as well.

They were strongly fancied to make the final when paired with Division 1 side Newbridge Hotspurs in the semi-final but the game proved to be a real struggle and it was only a last minute winner from Aneas Murphy that sealed their passage into the final after a 1-0 win.

There was a surprise on the other side of the draw when Premier Division runners-up Clane Utd prevented Senior Division champions Liffey Celtic from reaching their third final in a row after a 2-0 win. Goals from Jordan Pedreschi and Jason Acton put Clane in the final for the first time and set up a special day for their manager Sean Casey.

Casey was already a Coill Dubh legend was what he had done in his playing career and he was there for many of their best days, including that ‘98 Lumsden Cup win, but now had to go up against his former club. His influence on the Clane team meant some of his players were also going up against former team mates, in particular Mark Heffernan who had played for Coill Dubh in the infamous ‘final that never was’ in 2003.

Trevor Bowers scored two goals in that final and he struck a post in the ninth minute as Coill Dubh began the 2010 final on the front foot. 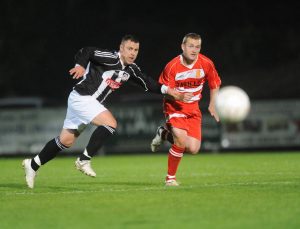 After Clane had weathered that early storm, they almost took the lead themselves but Paudie O’Neill managed to get a hand on Jason Acton’s 25 yard free kick and push it over the bar.

Clane suffered a blow just before half time when goalkeeper Lukas Eljansinki was forced off but they were lucky to have a good replacement in the form of Bridgewood Celtic’s 2008 winning goalkeeper Ray Kelly.

A tight and tense battle, the game sprung to life just before the hour mark when Acton hit the Coill Dubh crossbar at one end and then moments later Coill Dubh captain TJ Moore was only inches away from connecting with Noel Byrne’s cross.

The decisive moment came in the 66th when Mick Sullivan scored the only goal of the game. In 2006 he scored what was definitely the best Lumsden Cup  final goal for a losing team when he scored from over 40 yards for Carbury against Liffey Celtic, this goal wasn’t as pretty but as winning goal it meant much more. Noel Byrne’s superb corner picked him out and for once Clane were slack with their marking and Sullivan was able to head home.

Clane pushed hard for an equaliser but it was to be Coill Dubh’s day, particularly sweet for Tom Sullivan and John Sullivan who had been part of the Carbury team beaten by Coill Dubh in ‘98. 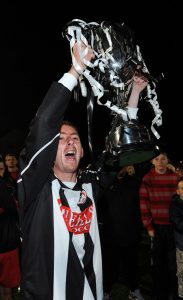 It hadn’t been the exciting goal that the finals preceding this year had been and man of the match, Coill Dubh midfielder Joey Behan, summed it up best.

“It was a tough match, there was no give at all. It was just whoever came out on top in the battle, it was just a pure battle of a match.

“It was always going to be one goal that would settle it. It wasn’t a game for pretty football, it was just hard tough football and thank God we came out on top,” he said. 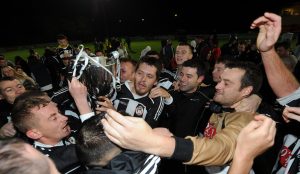