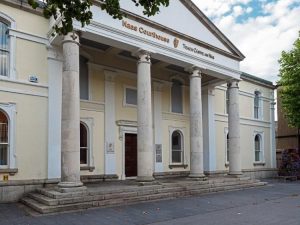 A NEWBRIDGE teenager has appeared in court charged with the assault causing harm of Peter Kennedy on Tuesday night.

Nineteen year-old Brian Ibe, whose address was given as 35 Moore Park, Newbridge, and no fixed abode, is alleged to have entered that address as a trespasser and committed an arrestable offence and assault causing harm on April 28.

He appeared at Naas district court this morning and was flanked by a number of gardaí wearing public order unit uniforms during the brief hearing.

The court was told it would be alleged that the defendant smashed a window to enter the house, went directly upstairs and attacked the injured party.

His (the defendant’s) mother and six-year-old niece were also in the house at the time.

The court heard that Mr Kennedy had sustained serious injuries including multiple head fractures, lacerations and a broken jaw.

He was initially treated at the intensive care unit of Naas Hospital before being transferred to the ICU in Beaumont Hospital.

The court was told a more serious charge was being put to the DPP for consideration.

Judge Zaiden remanded the defendant in custody until May 7 when he will appear by video link from Cloverhill Prison.

The judge also ordered a psychiatric and psychological assessment for the defendant.