AFTER waiting 12 years for their second Lumsden Cup title, Coill Dubh only had to waiting 12 months for their third as they became the first side to retain the trophy.

Led once again by the indomitable Paudie O’Sullivan and John McLoughlin, Damien Leeson’s extra time goal was just about enough to get over an emerging Naas side. Although Naas struggled near the foot of the Senior Division in this season this was the start of an excellent period for them and they were only a play off defeat to Castle Villa away from matching Coill Dubh’s achievement of winning three Senior Division in a row in the following seasons.

To get to the final Coill Dubh had come past Sallins Celtic in the semi-final while Naas got the better of Suncroft and the final was set for Sunday 30 October 2011 in Station Road.

Naas made a dream start to the game when Jamie Lambe netted the quickest Lumsden Cup goal after just 54 seconds and Coill Dubh found themselves on the backfoot for much of the opening half. 2010 winning skipper TJ Moore equalised for them after 26 minutes but Naas quickly regained the lead through a Stephen Burke header.

Naas really could have pulled clear before the half time break and Coill Dubh were indebted to goalkeeper Alan Sheridan for a string of fine saves, most notably a brilliant one handed save to keep out Burke’s 25 yard free kick in the last minute of the half.

Half time came at the right time for the reigning champions and they improved after the break. Still, they had to wait for a brilliant 25 yard Noel Byrne free kick in the 80th minute to get back level.

Aneas Murphy almost snatched the game for Coill Dubh in injury time but Aaron Smith, an unused sub on the Crystal Celtic winning team of 2004, made a superb save to force the game into extra time.

Through the extra time period a winner looked unlikely but with just five minutes left Coill Dubh substitute Graham O’Sullivan teed up Damien Leeson and he blasted past Smith for the winning goal.

After being part of the Bridgewood squad in 2008, and playing in the 2010 final for Coill Dubh it was Leeson’s third winners medal in four years and after the game he said had just about the energy left to score the decisive goal.

“I don’t know where I got that burst of energy from, some go in like that and some don’t and I was lucky tonight that it went in. The boys on the line told us to never give up and I just kept going until my legs were gone and thank God it got me right through to the very end,” he said.

Becoming the first side to officially retain the Lumsden Cup was yet another fantastic achievement for the club.

“We always pull together. I know through the Gaelic that a lot of lads have been missing but we always come together when it matters and we proved again tonight that we are one of the best teams in Kildare,” said Leeson. 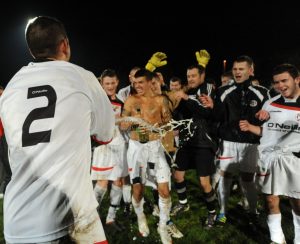 This win was Coill Dubh’s third Lumsden Cup and made them the competition’s most successful team but Castle Villa were back the following year with a chance to match them and tomorrow we’ll look back at their 2012 final against Rathangan.