TO reach the 2012 Lumsden Cup Final, Castle Villa had to overcome Coill Dubh in the quarter-final and then Liffey Celtic in the last four. Qualified for their sixth final, they had all the pedigree going up against a Rathangan side in the final for a first time but they would be no pushovers.

Rathangan had battled their way through the divisions in quick fashion and proved a match for most in their short time in the Senior Division. They lost the 2010 Senior Division Cup final to Ballycane Celtic but gained revenge 12 months later when they defeated the same team in the 2011 final.

To win the 2012 Lumsden Cup could have been seen as a natural progression for that Rathangan team but they came up against a very determined Villa side who were managed once again by Liam Murphy.

In goal, Villa had Alan Proctor who had played in five of Villa’s six finals, including their first back in 1997 but despite his experience he was beaten after just three minutes when Eoin Kennedy’s inswinging corner went straight into the net.

A lesser team may have crumbled after that early setback but Villa had too much know how in the team for that to happen. They also had Paddy Mahon who was perhaps the best striker in the league at the time.

He had a successful stint with Kildare County in the League of Ireland and was a very talented GAA player too and he went on to have a superb game in this final. As well as dominating this game, he went on to score a famous title clinching goal for Villa in 2013 and he was a difficult man to contain and proved too much to handle for the Rathangan defence.

Just three minutes after Rathangan’s opening goal, Roy Byrne set up Mahon for the equaliser. The striker then put his team ahead in the 36th minute with the finish of a striker full of confidence. 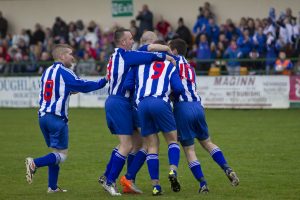 As well as his performance up front, Villa had Anto Lawlor in midfield, another who enjoyed a fine game in a fine season for him.

‘There wasn’t a blade of grass on the Newbridge Town pitch left untouched by his boots. He was the driving force from midfield and put in countless tackles to win back possession for his team,’ said the Kildare Nationalist report of his performance at the time. 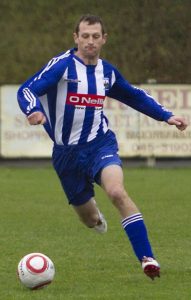 Villa wrapped up the win in the second half when just 30 seconds after coming on a substitute, 16-year-old Jordan Harmon sent Timmy Doyle through on goal and he followed up scoring two goals in the 2009 final by shooting past John Cassidy. In doing so, Doyle became just the third player to score in multiple Lumsden Cup finals.

Mahon was close to becoming the first player to score a Lumsden Cup final hat-trick on a couple of occasions but in the end Villa didn’t need a fourth goal to lift the trophy for a third time.

The match was notable too for it being Martin Moloney’s game to referee. That rare beast of being a universally popular referee, Moloney had scaled the heights of refereeing and for a time was regarded as one of the best assistant referees in Ireland, and even Europe. He ran the line in the League of Ireland for years and also in European and international games but brought down the curtain on his career in the middle as he fulfilled a personal ambition of refereeing Kildare’s biggest final. 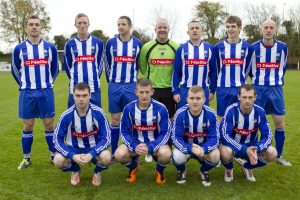 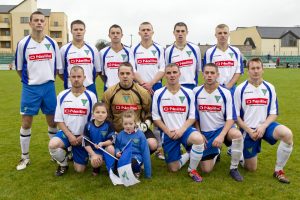 Tomorrow, we’ll back at the 2013 final when Bridgewood Celtic and Liffey Celtic met in a repeat of the 2008 decider.