THE 2013 Lumsden Cup was the first time that we saw two teams set up a repeat final.

In 2008, Bridgewood Celtic stunned Liffey Celtic when they came from 3-0 down to force extra time before winning the game 4-3.

Once again, Bridgewood started the 2013 final as underdogs. They had finished the season in third place in the Premier Division while Liffey Celtic, in the first season under Fergal Finn’s management, finished comfortably in mid table in the top flight.

Bridgewood proved their quality in the semi-final by overcoming Woodstock while Liffey needed penalties to overcome Naas Utd.

The Robertstown side went ahead at Station Road after 16 minutes. John Sullivan, playing in a final for a third different club after also representing Carbury and Coill Dubh, put Bridgewood ahead when his free kick found a way past John Cassidy.

They could have went 2-0 ahead when Damien Leeson’s free kick was almost headed into his own net by Keith O’Riordan but two minutes after that, Liffey were level.

A high ball into the area wasn’t dealt with by Bridgewood and Anthony Durney was on hand to power a header past Des Palmer.

Leeson, only came into the game as an early substitute after Mark Gill went off injured, and his pinpoint delivery was starting to cause Liffey real problems. He created a chance late in the half but Sullivan put his header over the bar.

They were made pay for at the far end when Darren Kilbey headed home from Phil McCoy’s corner to put Liffey ahead for the first time two minutes before half time.

But the Newbridge side couldn’t get to half time with that lead intact. Once more, Leeson’s delivery caused havoc and Sullivan converted at the back post after being left unmarked.

Leeson then turned scorer, and matchwinner, when Bridgewood were awarded a penalty six minutes into the second half after Brian Murphy had been adjudged to have fouled Ian Mangan. 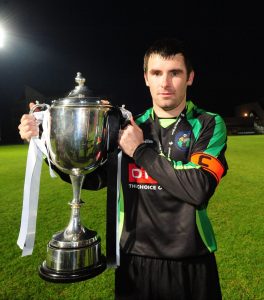 The last half hour of the game was one way traffic as Liffey poured forward looking for an equalising goal but the best they could muster was a Stephen Reidy shot that flew just past the post and a Kilbey header in injury time that he couldn’t get on target.

It was a sweet win for Bridgewood manager Sean Casey, a winner as player with Coill Dubh, he lost a final as manager with Clane Utd and this was his first win as a boss. It was Leeson’s fourth winners medal and his second winning goal after scoring the decider for Coill Dubh in 2011. Bridgewood remain the last side from outside the top division to have won the competition, in fact the last two occassions the competition has been won by a team from outside the top division was Bridgewood Celtic.

This was the start of a heartbreaking spell for Liffey Celtic in the competition and things didn’t get any better then they played Bridgewood’s near neighbours Eleson Utd in the 2014 final, we’ll look back at that tomorrow. 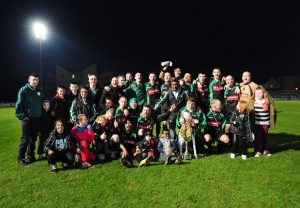