THE only good thing that Liffey Celtic could have taken from their 2008 final upset when they lost to Bridgewood Celtic after leading 3-0 was that surely that could never happen again.

They did lose again by 4-3 to Castle Villa the following year after leading three times but amazingly, the worst was still to come for them.

4-3 was a scoreline that meant a lot to Eleson too, they won three of their four games to reach the 2014 final by that score, and also scored four in their 4-1 semi-final win over Caragh Celtic.

For the first time in 11 years, the final was moved out of Station Road and the game was played at Castle Villa’s ground in Mullarney Park.

There was no thoughts of any kind of upset in the opening 45 minutes as a very good Liffey side set about dismantling an Eleson side who were battling relegation. 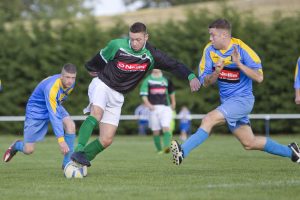 If anything, the half-time scoreline didn’t reflect how dominant Liffey had been in the opening half and they could have been further ahead.

But the game was to turn on its head in storybook fashion in the second half.

It took just three minutes of the second half for the game to take on a different feel. Ciaran Bowers intercepted a pass from Liffey ‘keeper Kevin McDonnell and then brilliantly sent the ball to the net from fully 40 yards.

That spurred Eleson on but in truth, although Liffey were under pressure their defence remained in control. Eleson’s one real chance during that time fell to Joe Bowers but fired over after his initial shot had been saved.

Liffey concentrated on defending their lead and rarely ventured forward but did have loud appeals for a penalty when it seemed that Cullen had been sent tumbling in the area, but to their frustration no whistle was forthcoming.

Any chance that Eleson had of mounting a comeback seemed to go completely up in flames when Paul Swords was sent off in the 82nd minute for his reaction to David O’Connor tackle.

But Eleson kept going and they reignited the game in the 86th minute when Danny Brady beat the offside trap and reached Sean Leeson’s cross to score.

Suddenly, Eleson’s tails were up and Liffey lost any composure as thoughts of that 4-3 scoreline came flooding back. Just a minute later, Eleson tied the game when Joe Bowers kept alive another Leeson cross at the back post and Stephen Doyle scored from six yards out.

But Eleson weren’t satisfied with tying the game and going to extra time and unbelievably, the ten men poured forward looking for a winner.

And it arrived in the first minute of injury time when Dean Bowers crossed from the right and Doyle was there to score his second goal of the game and complete the most amazing comeback. 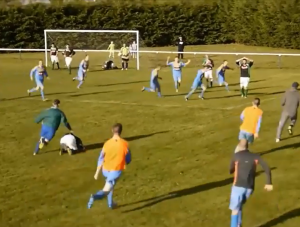 Highlights of the game can be seen here.

“We said it before the game messing that it would take four goals to win this but we said it again at half-time and we got there in the end.

“We said it before the game messing that it would take four goals to win this but we said it again at half-time and we got there in the end,” said the winning manager after Eleson Utd recovered from a 3-0 deficit at half-time. I think in the first half we were too worried about what Liffey were going to do. I’ve never seen us play as bad. At half-time, we got in and a few lads told a few home truths and we came out and got stuck in. We had a different attitude in the second half. We had the man sent off but we just kept going and going and once we got the second goal we knew there was a good chance. It’s unreal, unreal,” he said.

Eleson captain Ciaran Bowers was thrilled to get his hands on a trophy named after a near neighbour.

“Tony Lumsden, who the cup is named after, lived four doors down from me. I didn’t know him personally but I know of him and supposedly he was a very good man. I know his family and they are good people, thank God we are bringing it home for them,” he said.