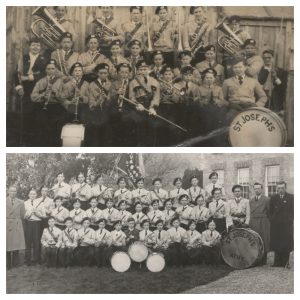 ATHY’S documented musical legacy stretches back to the 1880s with an extant account which records the existence of a band attached to the local branch of the Catholic Young Men’s Society. The first account I have found to a pipers band in Athy was a reference to St Brigid’s Pipe Band based in the area of Bert and Kilberry. The band which was photographed in 1919 ceased to exist in or around 1922 when several band members joined the National Army and some others emigrated.

The Churchtown Pipe Band emerged in the mid 1930s and I believe the band featured on 2RN, as present day Radio Eireann was then called. The band ceased to function when the local L.S.F. Piper’s Band was formed during World War II. The local pipe band tradition continued with the revival of the Churchtown Pipe Band which operated for a number of years up to about seven or eight years ago. Richard Bracken, a member of that band, formed another pipers band which I am glad to say is still going strong.

In the early years of the last century the Leinster Street Fife and Drum Band, commonly regarded as the Irish Volunteer’s Band, were very active. On the far side of the town the Barrack Street Band largely comprised of demobbed World War I soldiers continued a musical tradition associated with the original cavalry barracks at Woodstock.

In more modern times young bands were formed which gave many local youngsters their first opportunity to develop musicianship. Many of those youngsters later joined the Irish Army School of Music, while many more became part of the show band scene of the 1960s and later. St Dominic’s Band, of which I have little information and no photograph, was I believe based in the Woodstock area. St Joseph’s Terrace and more particularly Joe O’Neill, Jim Fleming and Kevin Fingleton from that terrace gave us the well remembered St Joseph’s Fife and Drum Band of the 1950s. Another band, also based at St Joseph’s Terrace, was the brass band, which I believe also was named St Josephs. The two photographs with this Eye are of the Fife and Drum Band and the Brass Band, both based in St Joseph’s Terrace.

There is an urgent need to record as fully as possible Athy’s musical past. I would be delighted to hear from any reader who can help complete the stories of the bands and the musicians of Athy and south Kildare.